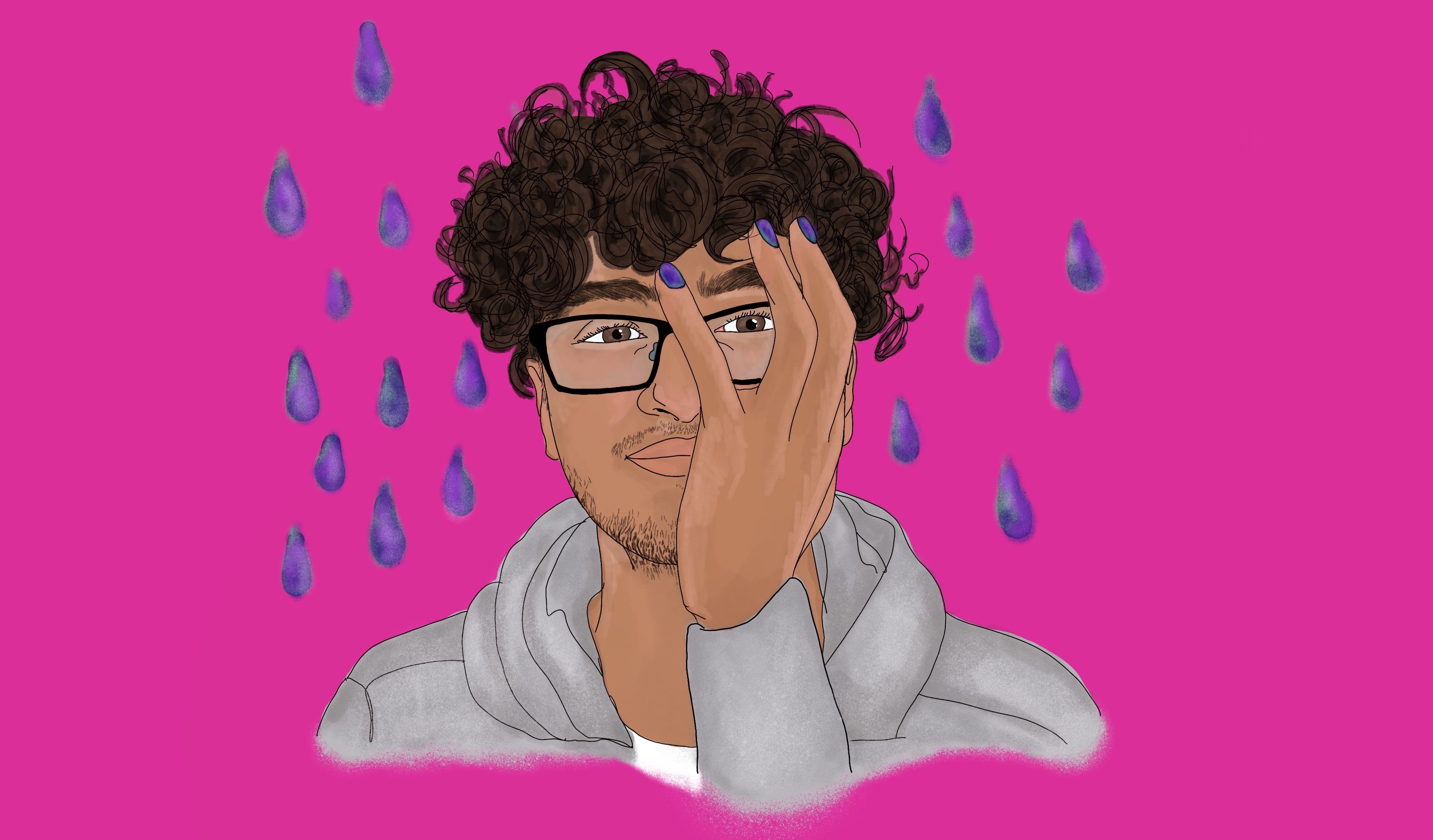 When it came to wearing his newly-painted nails outside, Ravi realised that sometimes, it is that deep

I chose to wear nail varnish for the first time because I saw Travis McElroy, middle brother of the podcast ‘My Brother, My Brother and Me’, had posted his pizza-themed nails on Instagram. I automatically thought ‘I should do that!’ …paint my nails, that is, especially if it would help me not bite my nails. But that seemingly tiny choice was about to submerge my anxious, gay brain into a 30-years-too-early mid-life crisis. “Nail varnish is just nail varnish. It isn’t that deep,” you might think – and, in most cases, you would be right. But in this particular instance, there was a lot more to me painting my nails a fetching shade of purple than just fashion. Enough to the act, in fact, that I went on a mini-rollercoaster of fear and confusion when I did it. It made me realise that the tiniest choices we make can have a weirdly big impact.

…that seemingly tiny choice was about to submerge my anxious, gay brain into a 30-years-too-early mid-life crisis.

Fear and identity are often tied up in each other. Our fears exist silently, without being seen or questioned, until something shines a light on them, and they shriek. Our identity exists equally quietly until we start to shine a light on that, too. Sometimes that new light leads to us putting a label on ourselves, which changes as we change. But sometimes, our identity is put under a different light quite suddenly and we must confront the new shadow that’s cast, which feels familiar and yet totally different. In this case, nail polish was the light. Yes, there’s something comforting about the ends of your fingers sparkling in the sun. But that light also exposed parts of me I hadn’t revealed before.

So I did it. After the topcoat dried, I was immediately in love. I posted pictures to social media and skipped into the kitchen to show them off to my housemates. I had painted them a beautiful, shiny, mermaid-themed purple that, while making the undersides of my nails look green and gross, felt like it gave me strength. Within the walls of my student home, it was wonderful. But, the next day, as I was walking to the bus stop, it felt like a target. I felt like a target. I couldn’t help but bury my hands in the pockets of my coat. I scanned my pass as quickly as possible, so my hands weren’t too visible. I didn’t make eye contact with anyone, too scared that it could invite backlash.

It’s almost funny when I think back on it. And it might seem strange, really, that an openly gay man would care about such archaic gender roles, even though they still affect all of us in some way or another. Toxic masculinity is the idea that men have to act a certain way. It fuels the idea that we can’t have emotions or do basic household chores. It’s a false idea of strength that doesn’t exist. We’re so blinded by who and what we should be, as if “should” is a word that needs to exist anywhere near the way we dress or the labels that we use.  I felt like I would be rejected for choosing to go against this. For choosing to have a little bit of fun with my nails.

I was lucky. My fears never became reality. No one commented on my nails, not to me anyway. My friends continued to gush about how much they loved them over our dinner of nuggets and curly fries later on that day. And why, I thought, should I have to care about the opinions about random people when I have the support of my friends?

My wardrobe would probably be considered stereotypically ‘masculine.’ It’s mostly jeans and t-shirts and hoodies. I have a few Pride items, including a pin on my coat (yes, the same coat I hid my nails in has a loud, enamel rainbow on it). But nothing that says anything quite as loudly as I felt nail polish did. Wearing it shone a new light on how I saw myself. It made me rethink the relationship between my sexuality and how I look on the outside to other people. My outward appearance doesn’t fall into obvious LGBT+ stereotypes and even if it did, a pin might go unseen. A T-shirt won’t be worn every day. While nail polish can be taken off, it’s essentially a permanent choice. I want to wear it every day possible – but in a society drenched in stereotypes, and that would recognise me as an out gay man, this means displaying my sexuality in an obvious way. I know that’s okay now but at the beginning, it was weird.

I want to wear it every day possible – but in a society drenched in stereotypes, and that would recognise me as an out gay man, this means displaying my sexuality in an obvious way.

I began to realise I’ve always been hiding. I never wanted to draw attention to my sexuality. I’ve always been afraid to embrace elements of gay culture that gloriously dismiss what is ‘masculine.’ I felt as if that was too loud for quiet, shy me. I look back on my school days, when I was coming out, and I often think of how lucky I was. My sexuality got quiet acknowledgement and the amount of homophobic jokes I heard plummeted. It took my family a little bit of time to get used to it, but now they’re supportive. It could have been so much worse in terms of homophobia, but also in terms of how big a deal people could have made it. I didn’t want my sexuality to become what I was known for. I didn’t want it to become me.

Internalised homophobia, and internalised bigotry in general, is when people of marginalised communities (LGBT+ people, people of colour, etc) act on this bigotry. It is a reflex, growing up surrounded by so much hate. I would look at flamboyant men and think “no.” I would think I was better than them. A truly, truly awful thing to think. So, perhaps, wanting to hide is an aspect of this, something I’m still getting over.  Perhaps, it’s just a desire to not be defined by one aspect of who I am. Maybe, it’s both. When I started painting my nails, I was terrified. I didn’t want to invite homophobia when I had managed to avoid it before. I didn’t want to make this wonderful new discovery about something I wanted to keep on the down-low.

The first time I wore nail polish, proudly, was the week after I first put it on. I was on my way to an event, my hands no longer bound by shame, my nails freely on display.

The first time I wore nail polish, proudly, was the week after I first put it on. I was on my way to an event, my hands no longer bound by shame, my nails freely on display. They were navy, a deep, dark blue that in some lights looked black. And they were beautiful. My friends and people who I had never met told me they loved them. I’m so grateful to them for boosting my confidence when I needed it. They, to some extent, gave me permission to display my nails with pride. They told me it was okay to be loud. I am a proud, gay man, and that’s wonderful.

Now, my nails are my shield. They are my physical reminder to not care about other people’s opinions. I remind myself that nail polish doesn’t really have anything to do with LGBT+ identity, or with my own. Nail polish is just nail polish. Travis McElroy, the middlest brother who inspired me in the first place, is straight. While stereotypes affect us all in the way we see the world and ourselves, we must remember that they don’t exist. ‘Nail polish is only for girls’ has no meaning when the pigment sticks itself to anyone. 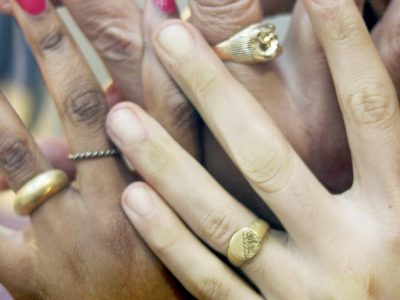 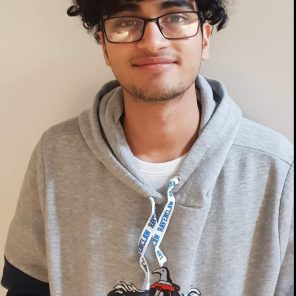