Lily is a self-confessed musicals fan, however she is not a fan of Hollywood’s most recent takes on some West End classics. Here is a hot take on why these films are a mistake.

Even if you were excited about the upcoming Cats film, I can almost guarantee that after watching the trailer you are no longer excited and were instead filled with the sort of existential horror you can usually only achieve after you watch a seagull eating a pigeon. I’m filled with so many questions…why are they all so small? Why does Jennifer Hudson’s face Look Like That? Why is James Cordon, one of England’s most irritating exports, so round in cat form? Why didn’t Dame Judi Dench know better? Why Taylor Swift? Why did they trust a man who cast Russell Crowe (a man who cannot sing) to play Javert, to direct this CGI nightmare?

The 2019 iteration of Cats is another big-budget Hollywood musical that’s sure to disappoint. It joins a list full of Broadway and West End classics that were all made into bloated films that lost an integral ingredient: the magic of theatre. The decline began at the end of the 1970s with The Wiz. What could have been a fantastical all-black version of The Wizard of Oz with an all-star cast (Diana Ross, Michael Jackson, Richard Pryor) turned drab, washed-out and boring, lacking the soul of the Motown inspired music that made it a hit in the first place. As the years progressed, there was a film version of ‘A Chorus Line’ that was released in 1985 that bombed in the box office, making only $14 million back of its $25 million budget.

Moulin Rouge! in 2001 and Chicago in 2002 are notable exceptions, as both retained a level of wonder without ever feeling too big. 2012’s Les Misérables suffers from this feeling of a film being ‘too big’. The barricade is no longer as impressive as its onstage counterpart because it’s a large-scale set on a soundstage in Buckinghamshire. When the barricade is revealed on stage, the shock of seeing the same stage that has been a shipyard, a factory, an inn and is now a collection of broken furniture that young men are scrambling over to ‘fight for their right to be freeee!’ is breath-taking. No musical film will ever be able to replicate the magic of the theatre. That is the most pretentious thing I have ever said. (P.S. I would sacrifice my little finger if I could erase the memory of Russell Crowe’s rendition of ‘Stars’.)

The 2004 film version of The Phantom of The Opera has the same problem Les Misérables . The charm is swallowed by glitz and glamour. A boat, sailing through a river underneath the Paris Opera House, with a mysterious masked man at the helm, and a naive ingénue singing a soaring ‘E’ note is, again, not all that impressive when you know it’s a huge set, with a budget of $70 million behind it, and not a set made by expert craftsmen that has to work night after night, and is contained inside a theatre that is 122 years old (a set that uses the original Victorian machinery to make the boat sail across the stage.)  Another huge problem with this film is that they cast Gerald Butler as the Phantom, a man who is universally acknowledged as attractive, and not even a prosthetic could spoil that. I will note here, that the prosthetic Butler wears in the film gives him the impression of having some scar tissue, perhaps from a burn sustained in early childhood, whereas the prosthetic worn on the stage is much more extreme. It’s a huge case of adaptational attractiveness (this video by Trope Anatomy explains adaptational attractiveness far better than I ever could.)

Johnny Depp plays a role in two very disappointing stage-to-screen adaptations. Tim Burton’s 2007 adaptation of ‘Sweeney Todd: The Demon Barbour of Fleet Street’ suffers from being all together too edgy. Its desaturated colour palette, and the undereye bags of Mr Todd and Mrs Lovett serve to make a dark, but fun, musical into classic Tim Burton Emo Fodder (I say this as a MASSIVE fan of The Nightmare Before Christmas). There are moments of levity in Sweeney Todd, but Depp’s performance is far too insular and… edgelordy. The characters differ from the grubby, vindictive and cruel characters from the stage show, and they became far too relatable for teenagers in knee-high Converse who sought revenge against their parents for not letting them dye their hair blue when they were 14. As you would expect from a Tim Burton film with an 18 certificate, it is stunningly violent, ranging from the expected throat-slitting, to Mrs Lovett being burnt alive, to Sacha Baron-Cohen being bludgeoned to death with a teapot (which he deserves for making us watch Brüno, frankly.) If I’m being super picky, and I will be, the blood is just too watery for my taste. Blood. Taste. Cannibals. Pies. Ah.

Into The Woods came out in 2014, and I can pretty much guarantee that most people who watched it then haven’t thought about it since. The film is confusing. The prologue features the stories of Cinderella, Jack (of beanstalk fame), the Baker and his wife, Little Red Riding Hood and… a witch who does a rap about vegetables. When these characters are onstage, it works just fine, but in the film version there are so many jarring cuts between the characters as they sing about their wishes, I felt profoundly seasick. It’s an ensemble cast, and so many of the characters are played by famous faces it often feels like a Saturday Night Live sketch, and every time a new celebrity steps into frame, I expected an unseen audience to whoop and cheer. Perhaps I’m most bitter that in the early 1990s, a reading of an early version of the script had Robin Williams as the Baker, Danny DeVito as the Giant, Steve Martin as the Wolf and bloody Cher as the Witch. Imagine Cher rapping about vegetables!

Cats is a strange musical to turn into a film. It has no real plot, and is pretty much a bunch of cats introducing themselves before they decide which one of them gets to go to cat heaven in a UFO. That’s the whole plot. I’ve never heard anybody describe Cats as their favourite musical, and despite it being the first show I had ever seen live and it probably igniting a life-long love for sequins and tights, it’s not one I would go and see again. I will certainly be avoiding watching the film because I do not want the nightmares Jennifer Hudson’s face will give me. Or their human hands. Why, god why, do they have human hands? 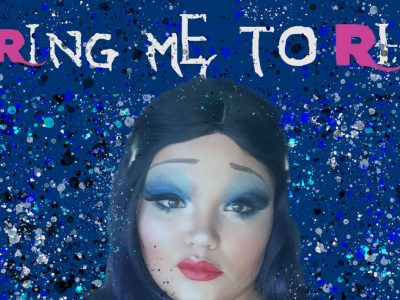 Bring Me To Rife

In Lily's last piece as an in-house content creator, she reflects on what it was like to be given this...
Lifestyle / August 22, 2019 / Lily Konteh

A handy list of ways not to make a fool of yourself when you're watching a drag show.
Arts/Culture / Bristol / Fun Stuff/Lists / Guide / April 9, 2019 / Lily Konteh
<PreviousNext>