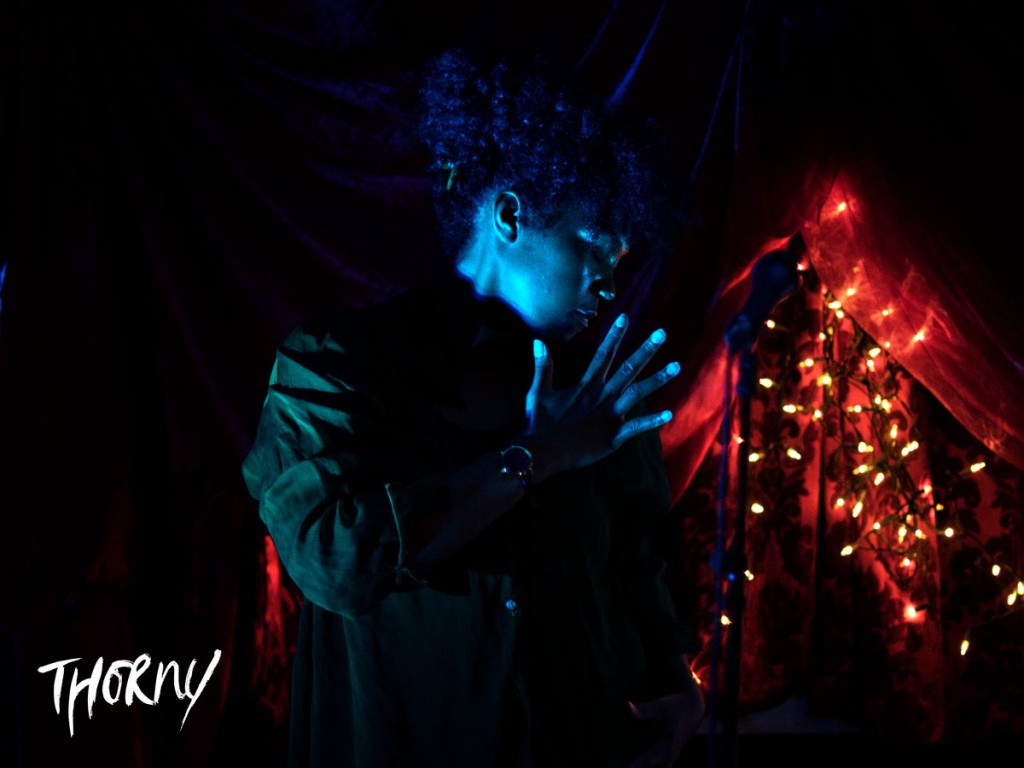 Kaja finds out about THORNY, the event that breaks the mould in the most fabulous, daring and inclusive way possible.

THORNY is the brainchild of 23-year-old producer and performance artist, Jo Bligh.  THORNY is the first of it’s kind. It isn’t your usual gig, LGBT+ event or cabaret. It’s a fun night out with a fantastic assortment of acts, in a really inclusive environment. It’s been a sell out since its first event and has expanded into being ran collectively by a family of artists, performers and directors who manage the ever-evolving event. It encourages liberation and self-expression in a really supportive environment. THORNY’s an event Bristol desperately needs for those of you who want a laugh, a dance and to live outside the box.

I spoke to Jo, and past THORNY performers, Rachael Clerke and Shon Faye, about why Bristol needs THORNY, and why you need to be first in the queue next time tickets are on sale… 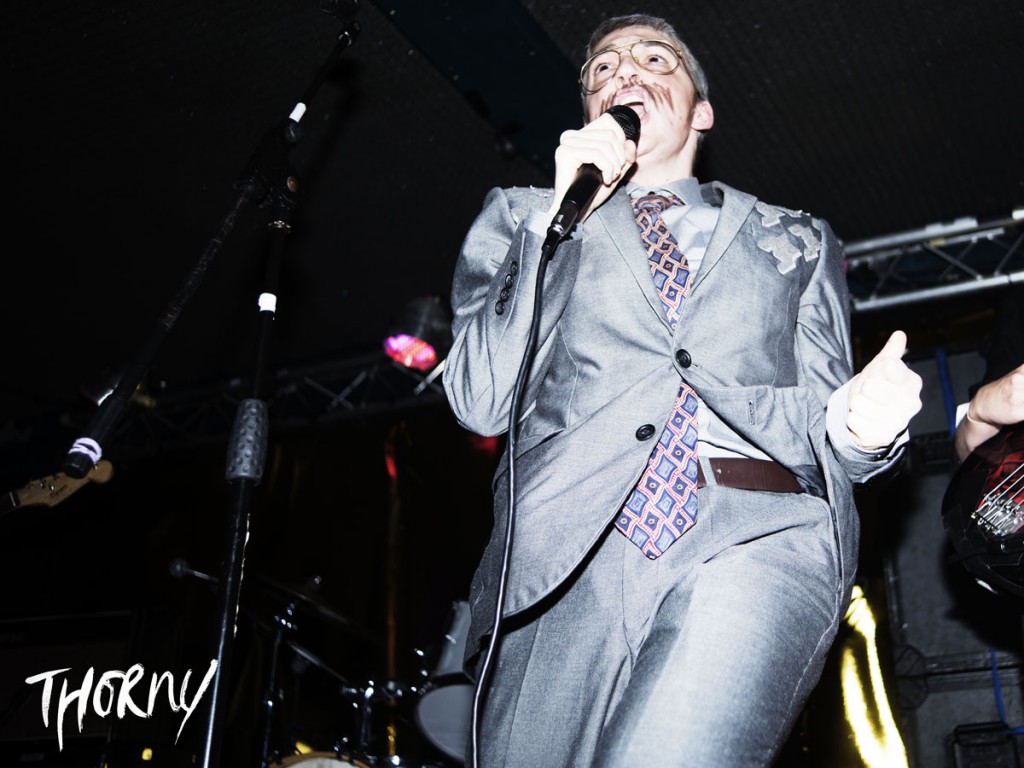 ‘THORNY is a community of outcasts. A place for the weirdos which is really open, supportive and celebratory. The acts are great and everyone is very friendly and wonderful.’

These are Rachael’s initial thoughts on THORNY. Rachael explained she is a part of the ‘the world’s finest drag king punk band’, called The Great White Males, who performed at one of Thorny’s latest events.

Drag. King. Punk. Band. That was music to my ears. Rachael had barely sat down when I begged her to tell me more.

The kick-ass band consist of four different personalities. There’s a middle aged architect, a politician, a property developer and a banker. Although recently they have had a fox hunter addition to the happy family. The band perform political satire, like their ABBA Nigel Farage Medley about the EU Referendum. 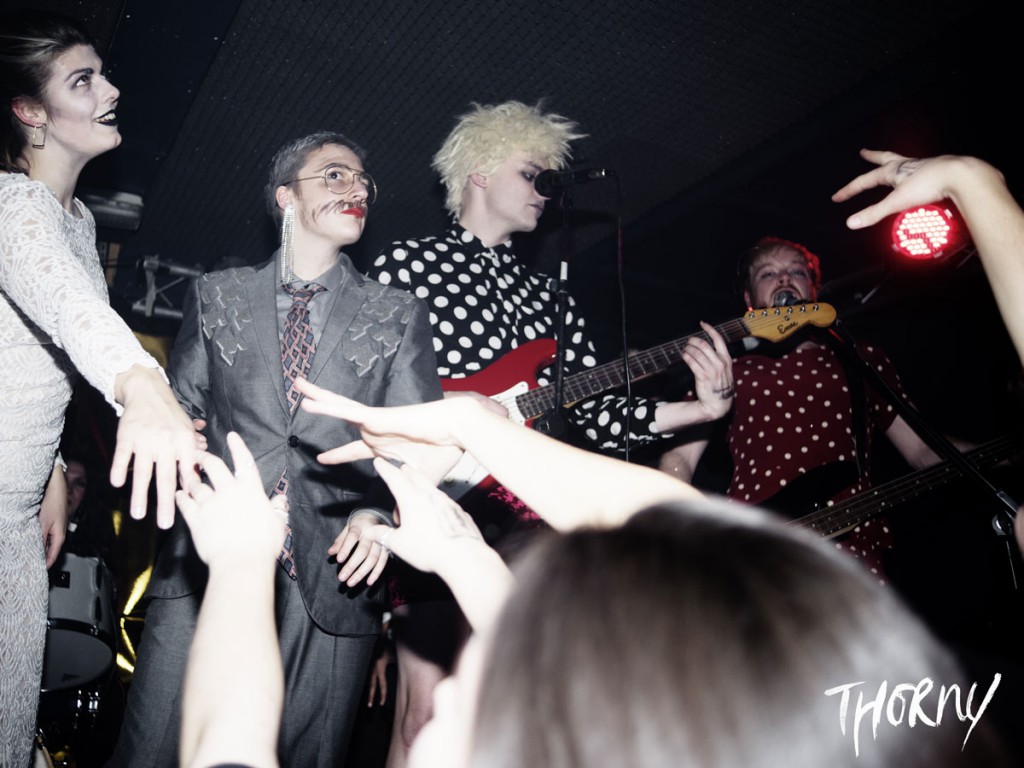 I asked Rachel what she thought of Thorny when her drag-king punk band played there last December. ‘THORNY…’ Rachael started thoughtfully… ‘Comes from a place of people who love music. Like a gig, but it’s evolved into more than that. There are some drag acts, performance art, bands, spoken word, poetry. It’s a really open format. And then after these acts it turns into a massive party and everyone dances.”

Rachael then got really passionate about THORNY, saying, ‘I think it’s the best thing that’s happened to Bristol since I’ve lived here. Really important. It’s queer in the true, political, accepting, fun sense of the word. It’s also really DIY in that it’s a small group of people coming together and making something really good happen’.

The Great White Males are currently touring in a gig called ‘Cuncrete’, so have a look here if you want to see them live. They are also  and having a session for people wanting to start their own punk band on 2nd May, so if you want to find out more email  Rachael. (I’ve already asked her to sign me up.)

Shon Faye walked in the room looking effortlessly young, a phrase she insisted I use. Shon told me about all the things she does, including starring in a BBC3 documentary about LGBT+ Britain, which will be coming out soon, and a video about the Tate Gallery and queer Britain. But it was her sense of humour that got her involved in THORNY.

Jo asked Shon to do stand-up, which she wasn’t sure about at first because she thought THORNY was mostly a music-based night, but she agreed and did stand-up comedy based around her experiences as a Trans woman. 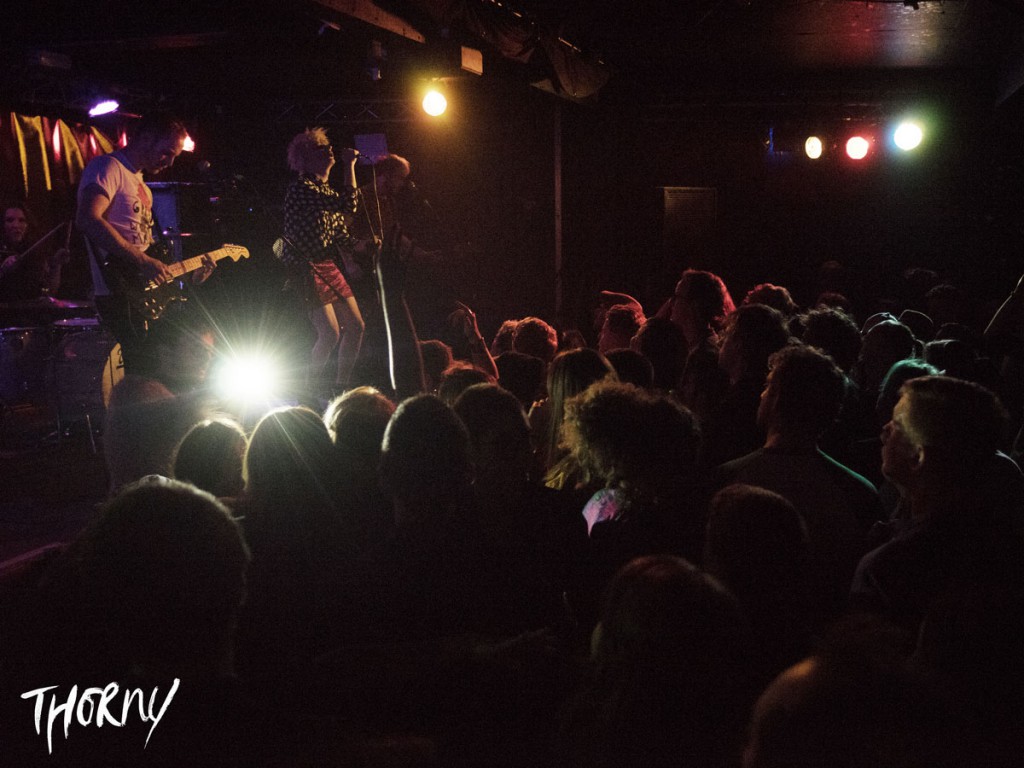 She told me, ‘THORNY is like nothing I’ve seen before. Growing up in Bristol (Bedminster) it wasn’t like Brighton or Manchester in that there isn’t a very big gay scene. THORNY fills this gap, and is very inclusive in many ways as well as a safe space for everyone (not just LGBT+). It’s relaxed, unpretentious, which I think fits into the mood of the city. Most importantly, it’s fun, regardless of whether you’re into every act or all the music, you’ll have a good time’. 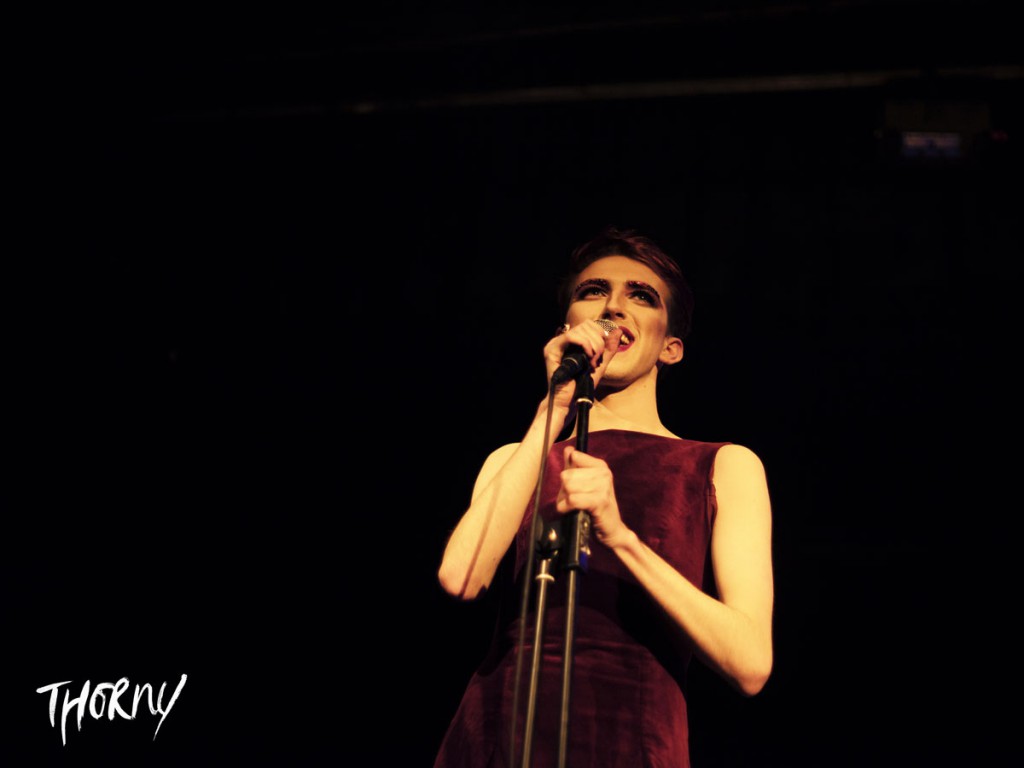 Jo enthusiastically told me about the upcoming event *shameless plug*. ‘THORNY events are generally 18+ because they’re held at venues which serve alcohol. The next event is on at Saturday, 20th May 2017, at the Exchange, Old Market. They are being headlined by a few acts, including an all girl punk band from London called ‘Skinny Girl Diet’, a local band called ‘Twin’, A drag artist called ‘Oozing Gloop’, and local performance artist, Isadora Vibes, who is a surrealist spoken word poet. AND there’ll be DJ’s until 2AM from Bristol Women in Music.’

I thought that sounds AMAZING, and whilst I had Jo with me, I asked what his favourite thing about THORNY is. He had created these nights, so what did he love about them? Jo thought about it and said, ‘I love it when new people curiously turn up to our events, maybe slightly unsure, and seeing them gradually become more liberated as the night progresses. A lot of times I’ve gone to gigs or clubs, I’ve felt self-conscious or anxious, so with THORNY I’m purposefully creating spaces which encourage people to express themselves, curating programmes where the performers might share something vulnerable, so everyone knows we’re there together. It’s supportive. And when it works, and I see people’s smiles and everyone’s dancing, I know it was definitely worth it.’ 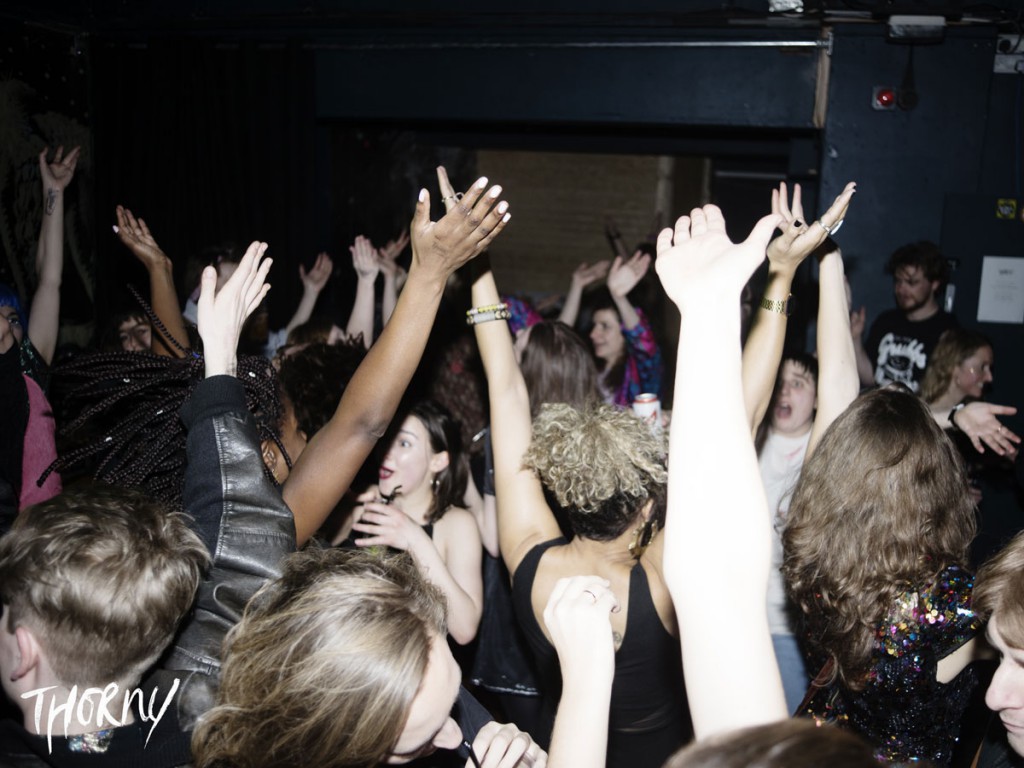 So if you want a night out filled with punk bands, stand-up, comedy, drag acts, spoken word… A place to let your hair loose, wear whatever you like, feeling free and un-judged… or somewhere to simply party all night, then why not come down to THORNY? The event Bristol needs. I’ve already got the date saved in my diary, and I hope to see y’all there!

Do you want a safe, inclusive, LGBT+ space where you can socialise and talk LGBT+ issues? Check out Freedom Youth 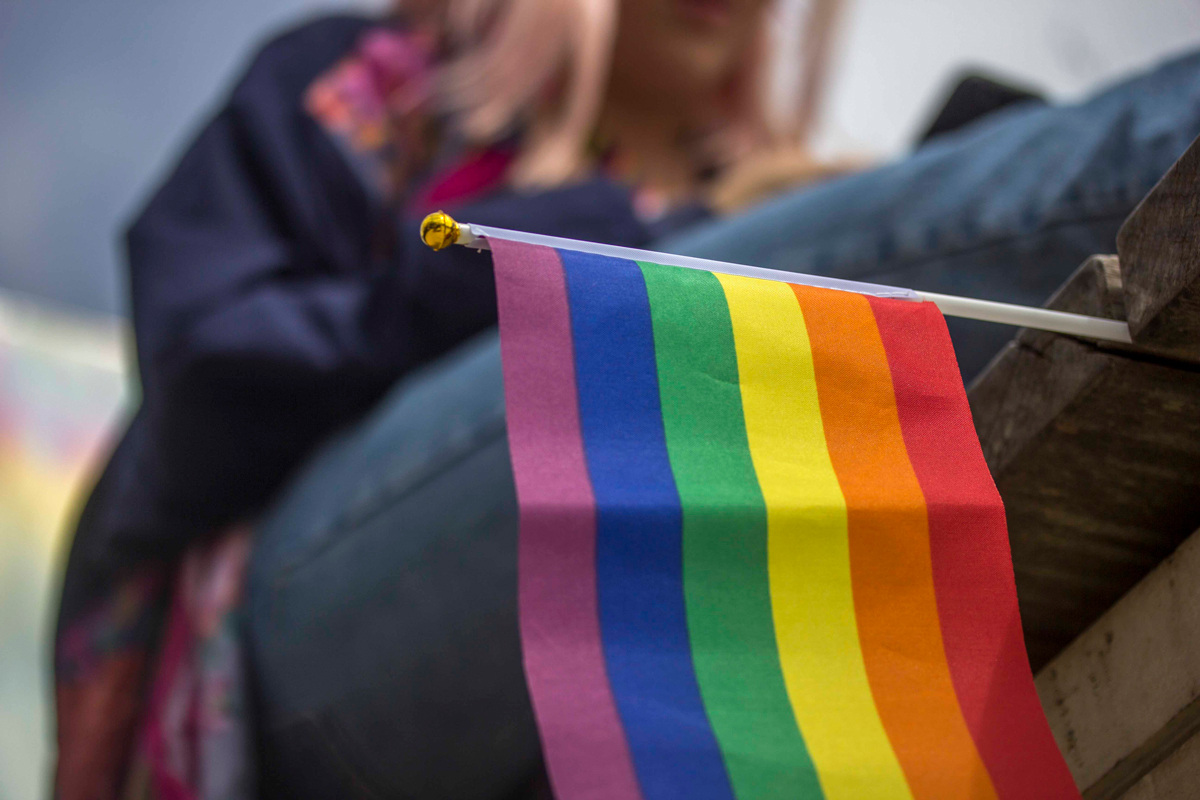 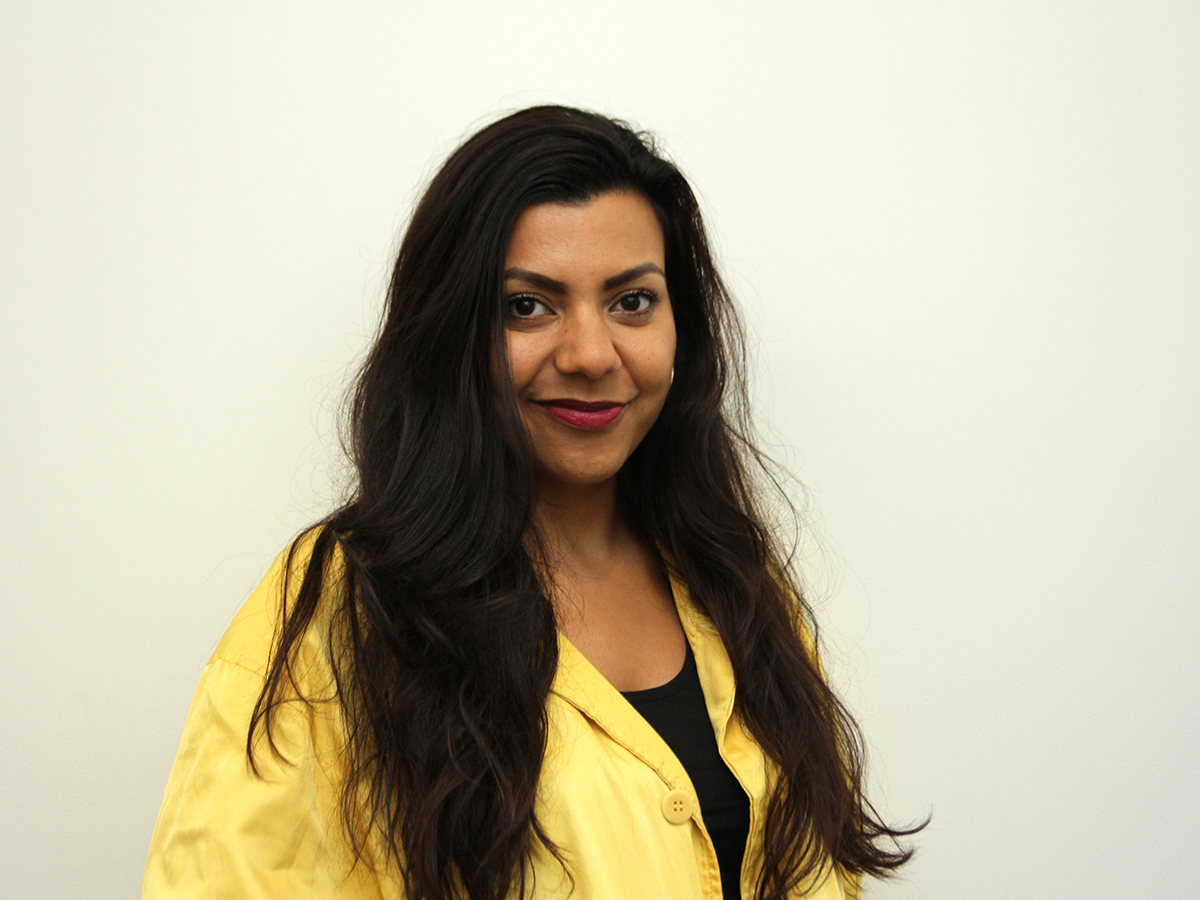 Our next free masterclass is with journalist Kieran Yates talking about how to make your own zine and why it's...
Events / September 3, 2015 / Rife Editor 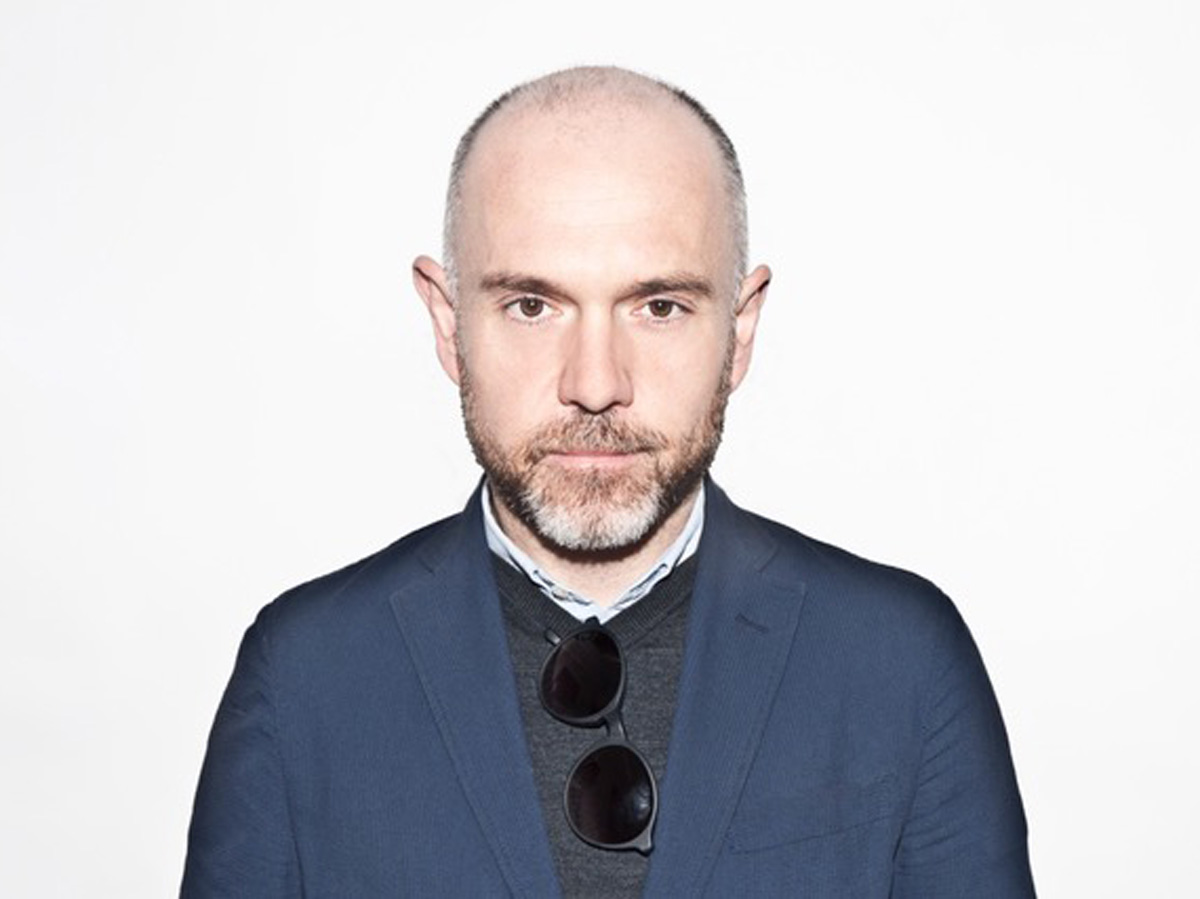 The Link, Rife's free networking event for Bristol's young creatives is back, in association with Freedom Of Mind Festival.
Events / September 25, 2017 / Rife Editor 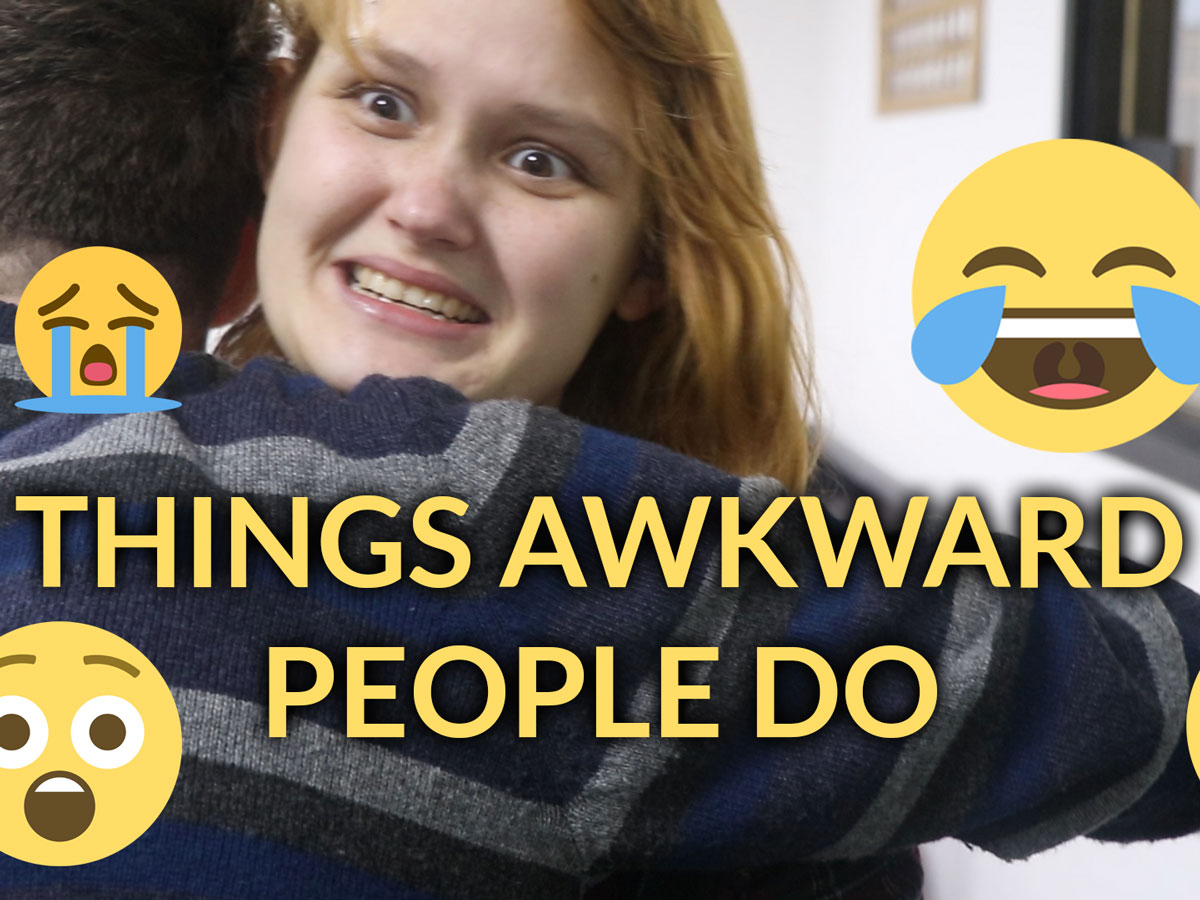 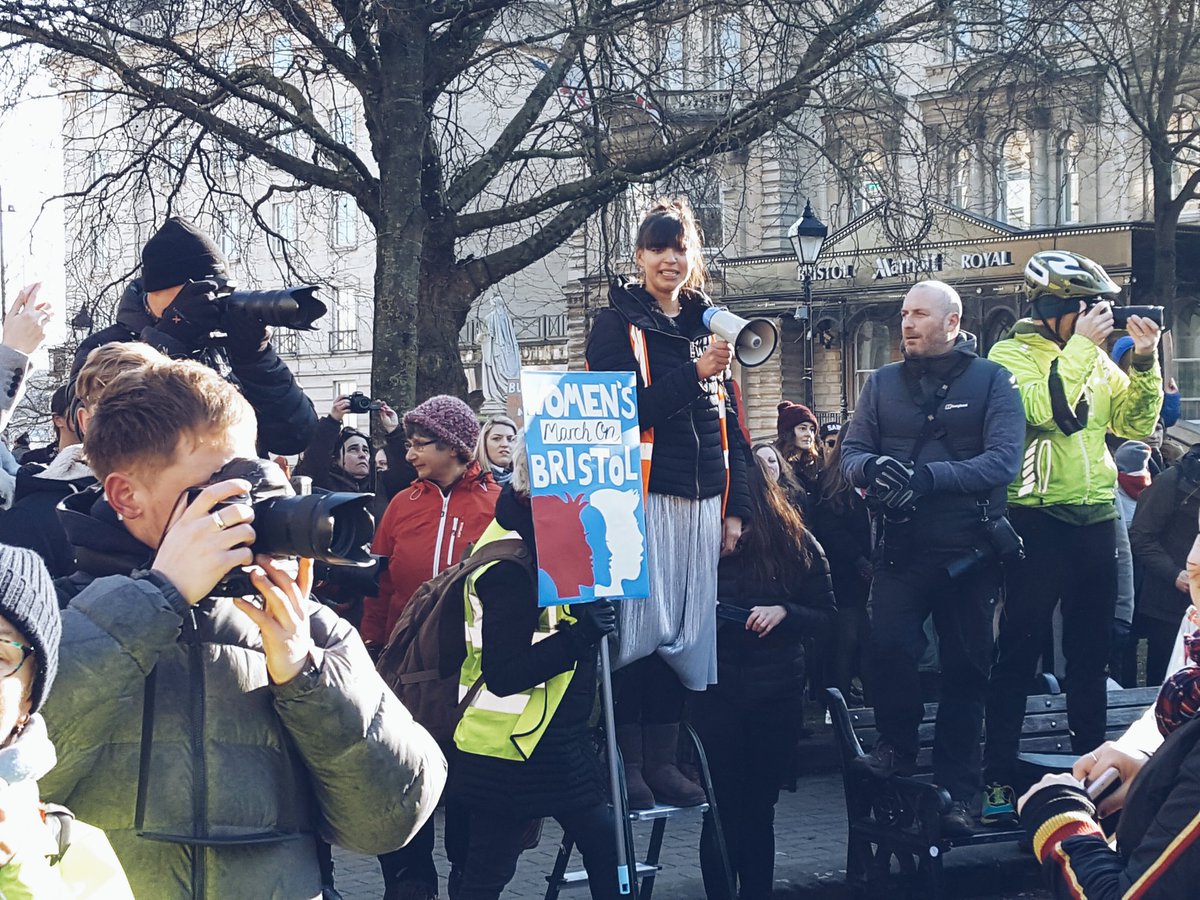 This weekend, 2.6 million people took part in Women's Marches all over the world, protesting the current President of the United...
Social Issues / January 23, 2017 / Kaja Brown 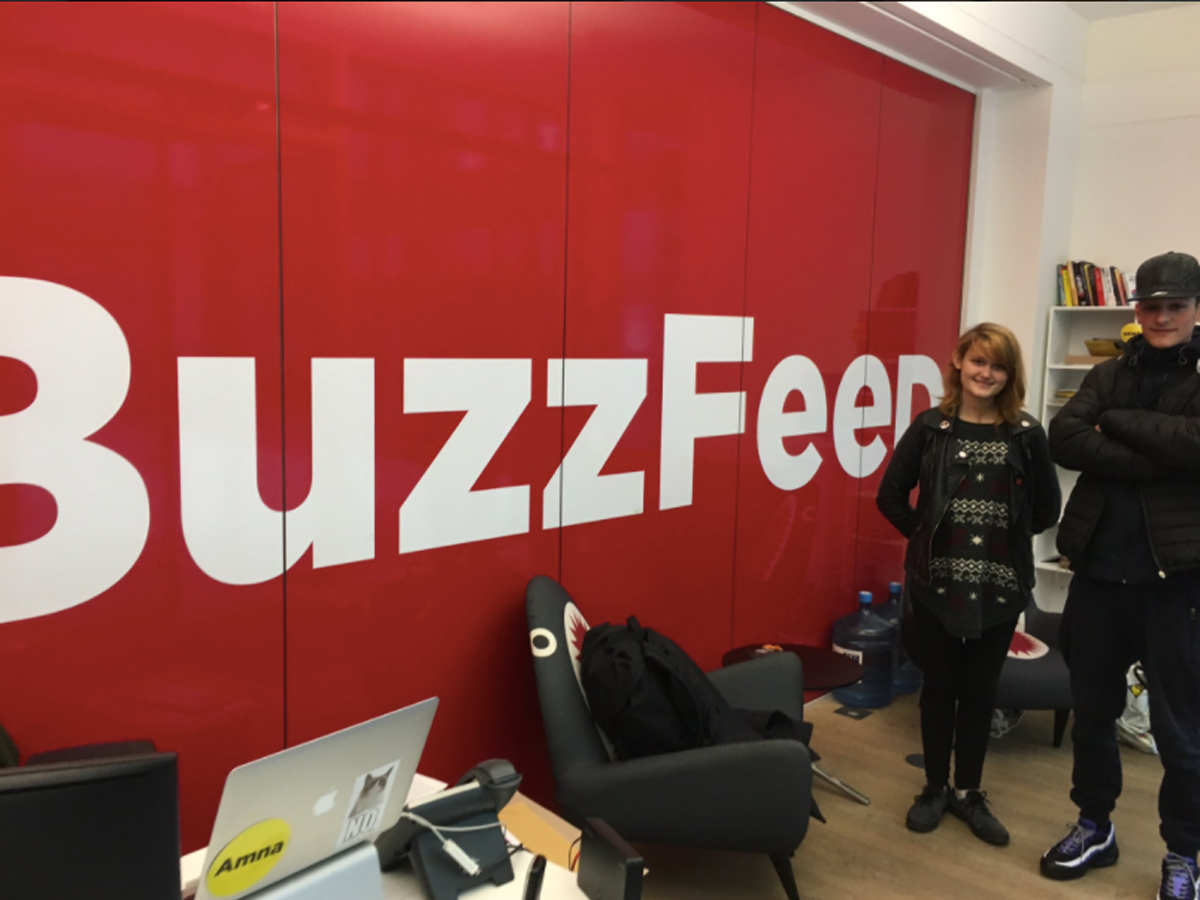 The Rife Team were lucky enough to be invited to visit the UK Buzzfeed offices in London, and this is...
Upskilling / November 23, 2016 / Kaja Brown
<PreviousNext>