Join Freedom Youth and Young People’s Festival Of Ideas for an event on LGBT+ culture and representation.

As February is LGBT+ History Month, on the 22nd February the Young People’s Festival of Ideas is teaming up with the M Shed and Freedom Youth Bristol to hold our second event of 2017, on language and representation within LGBT+ culture.

We’ve been organising this event over the past few months, and after speaking to Freedom Youth Bristol, we identified the need to start a conversation about how LGBT+ stories are told in the media, if they are told at all, and how LGBT+ topics are taught in schools, if they are taught at all.

Over the past decades there have been huge steps forward for equality, with the Marriage Act For Same Sex Couples passed in 2013, and the Alan Turing Law passed last month, which posthumously pardons 49,000 men for actions no longer considered illegal. Yet, there is still no compulsory LGBT+ education in British schools, and the academisation of schools is leading to less and less regulated Sex-Ed and PSHE. A 2015 YouGov poll suggests 49% of 18-25 year olds plot themselves somewhere other than 100% heterosexual on a sliding scale, meaning the national curriculum doesn’t cater to nearly half of young people, and this can lead to young people feeling isolated and confused when they can’t see people like them or families like their own represented. What about LGBT+ education that takes place outside the classroom? We want to start a conversation about LGBT+ education and LGBT+ representation in mainstream media.

We want to start a conversation about LGBT+ education and LGBT+ representation in mainstream media.

Despite these huge steps forward, there are always people who are questioning the direction in which we are headed. Recently, people have spoken out about the commercialisation of Pride parades, the inclusion of gay couples in Sainsbury’s Christmas adverts despite the fact they’ve have been accused of telling a gay couple to stop holding hands in store, the cinematic portrayal of transpeople by cisgendered actors, and about changes needed to combat biphobia and transphobia within the LGBT+ community. People are finding new and better ways to express who they are through constantly-evolving language, whilst others believe we’re moving towards a world with too many labels. Language plays a huge role in a situation where some people view the LGBT+ community to be ‘redefining’ words like marriage and family, and language can also be a means through which people of non-binary identities feel excluded.

Here are some LGBT+ groups and organisations based in Bristol

My Experiences With Straight Girls

Claire talks about some of the experiences she has had with heterosexual girls and how it's resulted in erasure and...
Social Issues / September 20, 2016 / Claire Innes 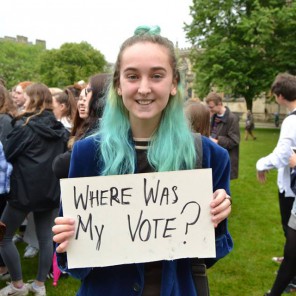 Cari studies Politics and Creative Writing at college. She has performed spoken word at the O2 Academy Bristol and can be found monthly at protests and open-mics, including Reclaim The Night, Votes at 16, End The Tampon Tax and Freedom of Mind Festival. When she's not performing, Cari writes almost-weekly poetry newsletters and distributes DIY poetry zines. She is also a member of the Young People's Festival of Ideas Collective and volunteers for The Mentality Project.