The Five Strangest Things I Experienced at Dismaland 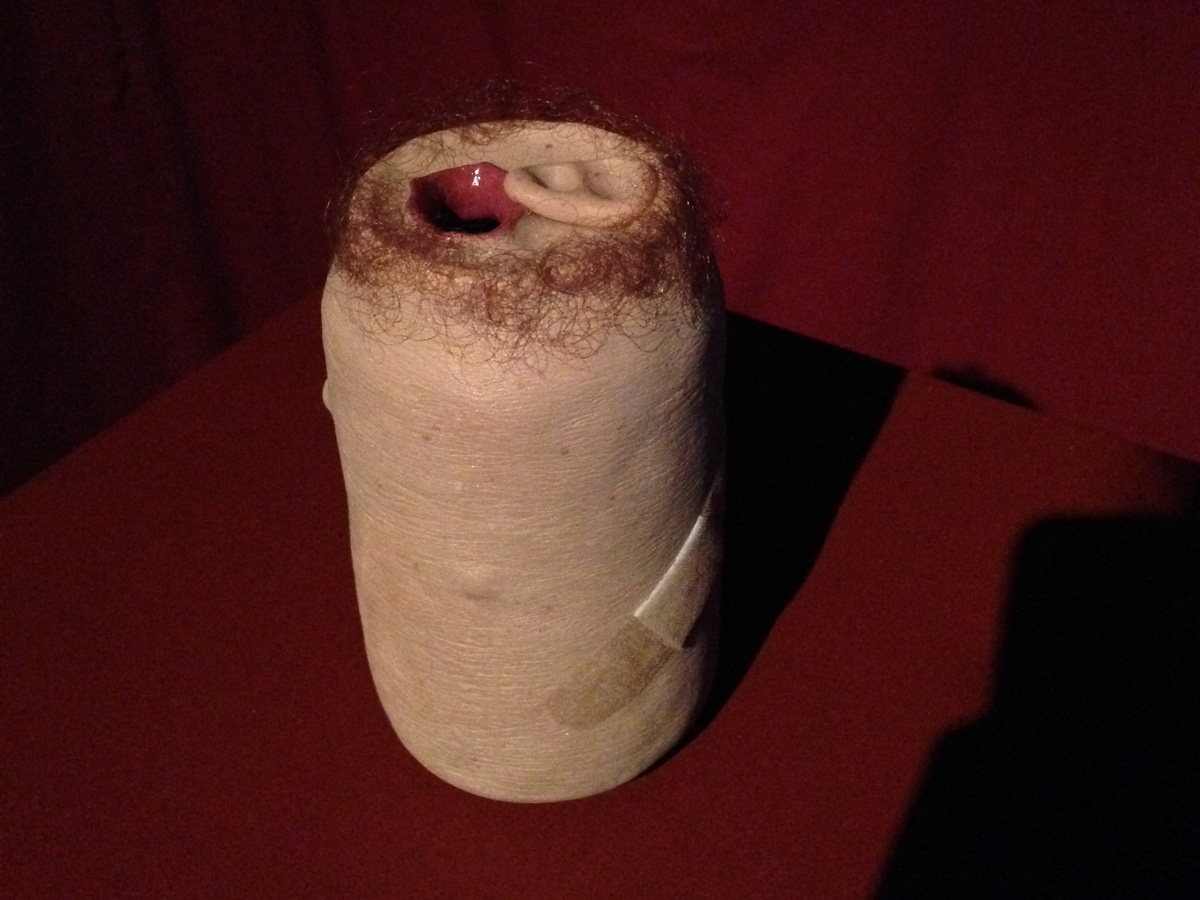 We at Rife were lucky enough to get into an early showing of Banksy’s new Dismaland. And… well, wow, we’re speechless.

As ‘Dismal’ as this sounds, I actually found the experience to be uplifting in many ways…

As you’ve probably heard, Banksy has recently opened an art exhibition dressed up as a grim theme park called ‘Dismaland’ in a derelict lido in Weston-super-Mare. Unlike Disneyland, the place where children’s dreams come true, the purpose of this theme park in is to give you a hard slap in the face with reality. I was lucky enough to attend the Dismaland launch and was well and truly blown away by what I saw.

Bansky – along with many other artists from around the world such as Bill Barminksi and Damien Hurst – draws our attention to a wide range of terrible contemporary social problems. Dismaland offers scathing satirical comment on everything from the conflict in Syria, to domestic abuse. These artists argue that the world young people are growing up in is not so magical after all, but filled with misery, poverty, corruption and cruelty.

As ‘Dismal’ as this sounds, I actually found the experience to be uplifting in many ways, which I will go onto explain later. There are a lot of incredible pieces of work with extremely important messages behind them, plenty of dark humour and many bizarre goings on to be witnessed. So, here is a list of the 5 best and weirdest things I experienced at Dismaland. 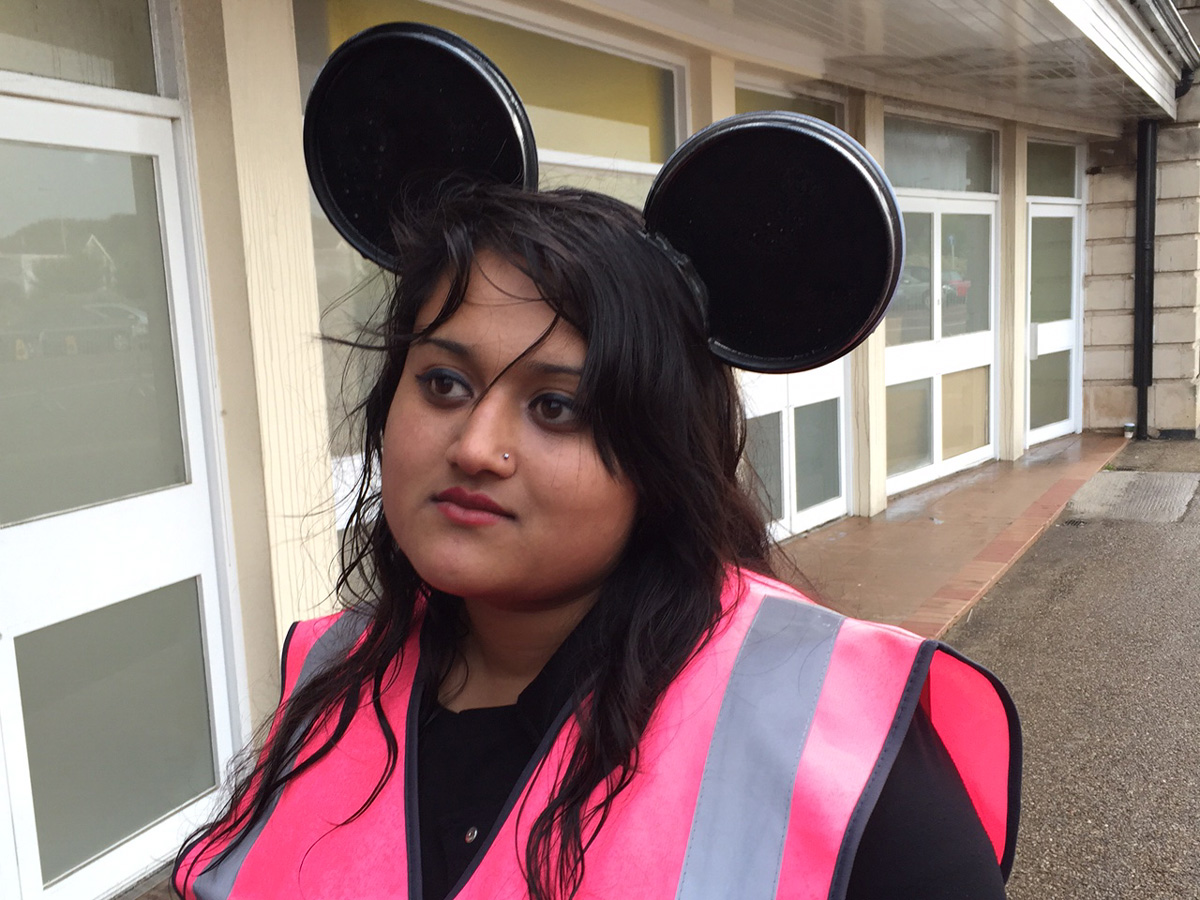 When I was waiting to enter the exhibition, I assumed the staff looked a bit glum as they were stood out in the rain. A particularly bored looking staff member asked, ‘Are you excited?’ I replied ‘Very…’ to which she responded ‘Well, you shouldn’t be’. It then became clear they were a part of the Dismaland experience. I found the contrast to the usual forced enthusiasm offered by such staff to be very humorous. As I was on my way out, one of them even leant over and quietly whispered ‘p*ss off’ into my ear. 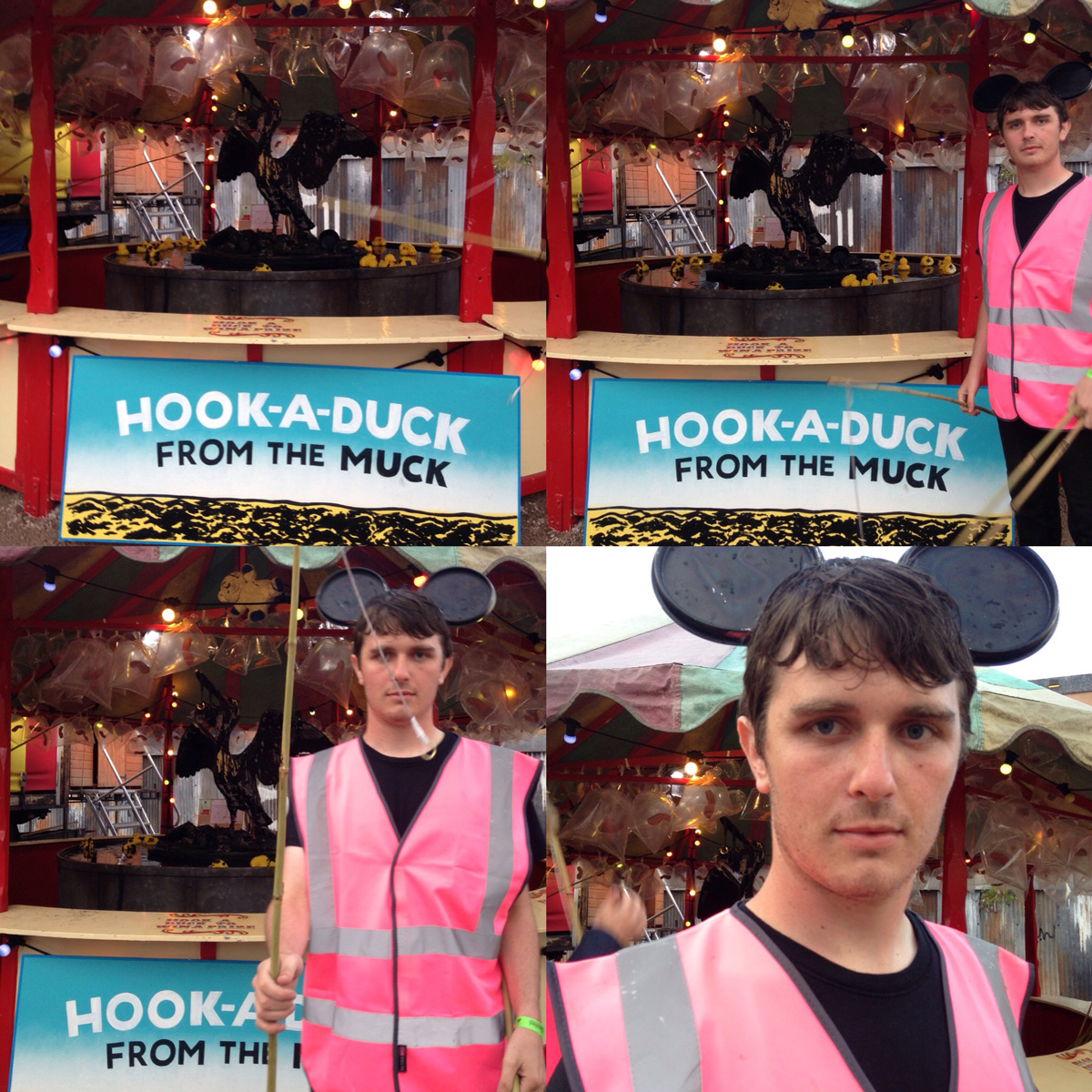 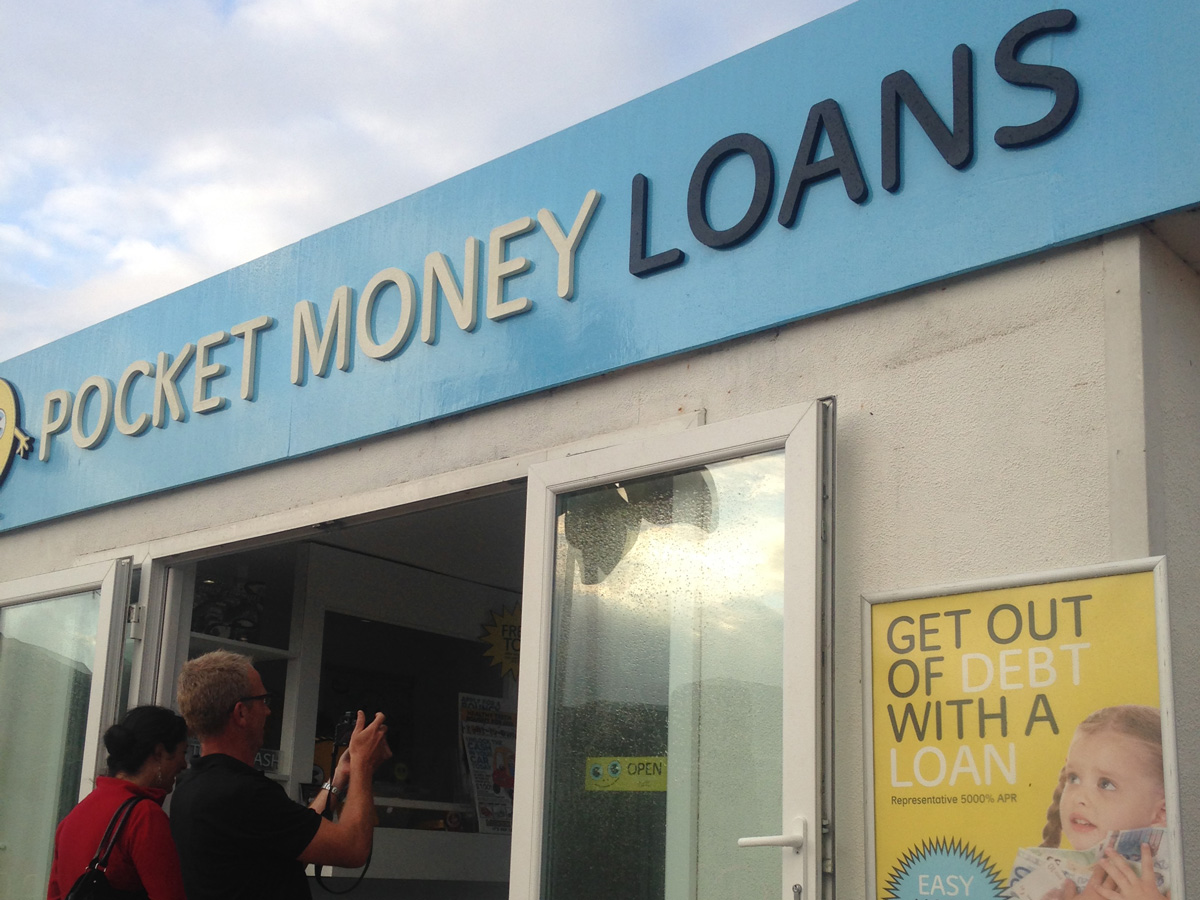 Being a student I’ve become used to the constant lingering feeling of dread caused by the sheer volume of student debt that I will leave university with. Therefore, I found this piece by Darren Cullen very easy to relate to. In the Dismaland brochure he states ‘children’s play, like every other aspect of human life has been colonised by capitalism, adapted into a sort of childhood training camp for the hard-working consumers and soldiers of tomorrow’. 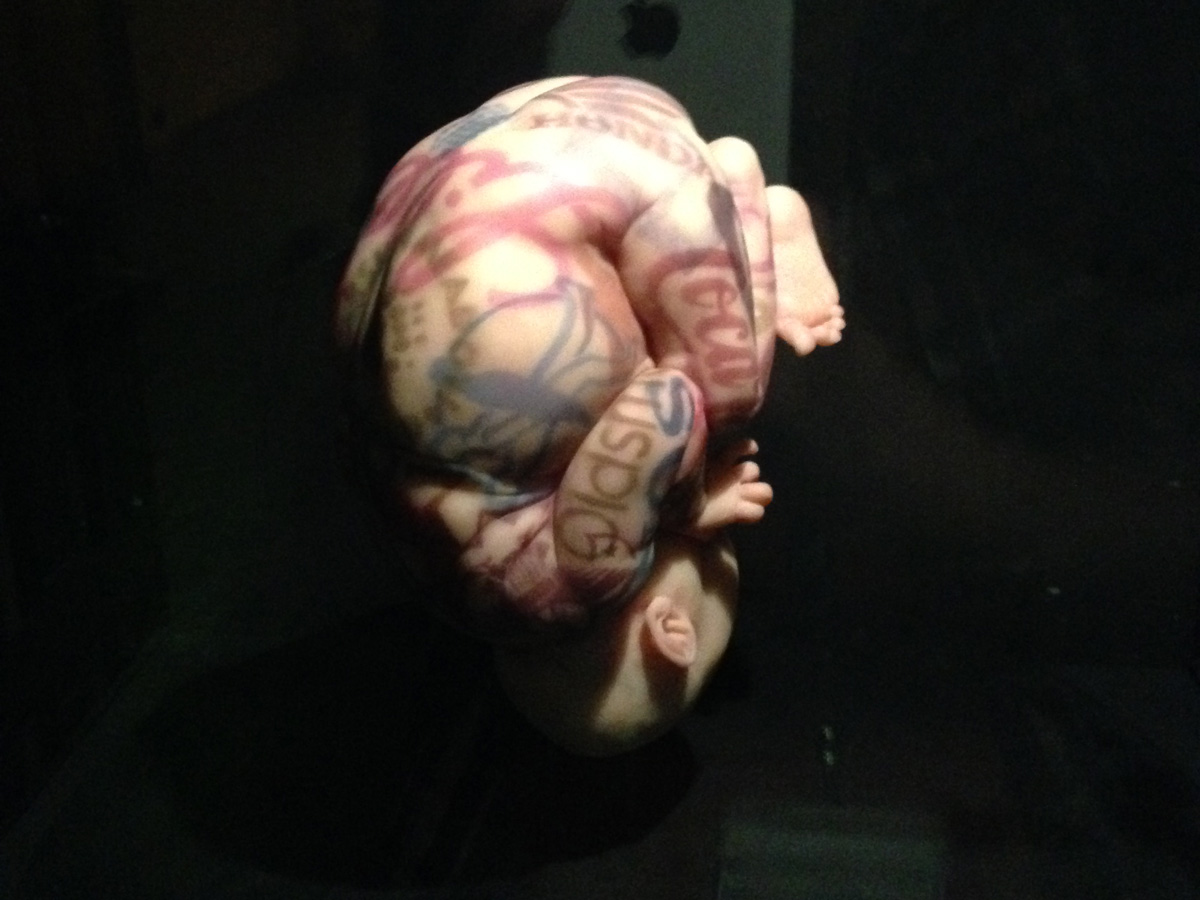 This piece shows a foetus inside a vending machine, its skin covered in the logos of several large corporations. It comments on the power that these companies have over people’s lives in our consumerist society. The vending machine represents how these corporations view human life as expendable and convenient to use for their benefit. I found it to be an extremely powerful piece. 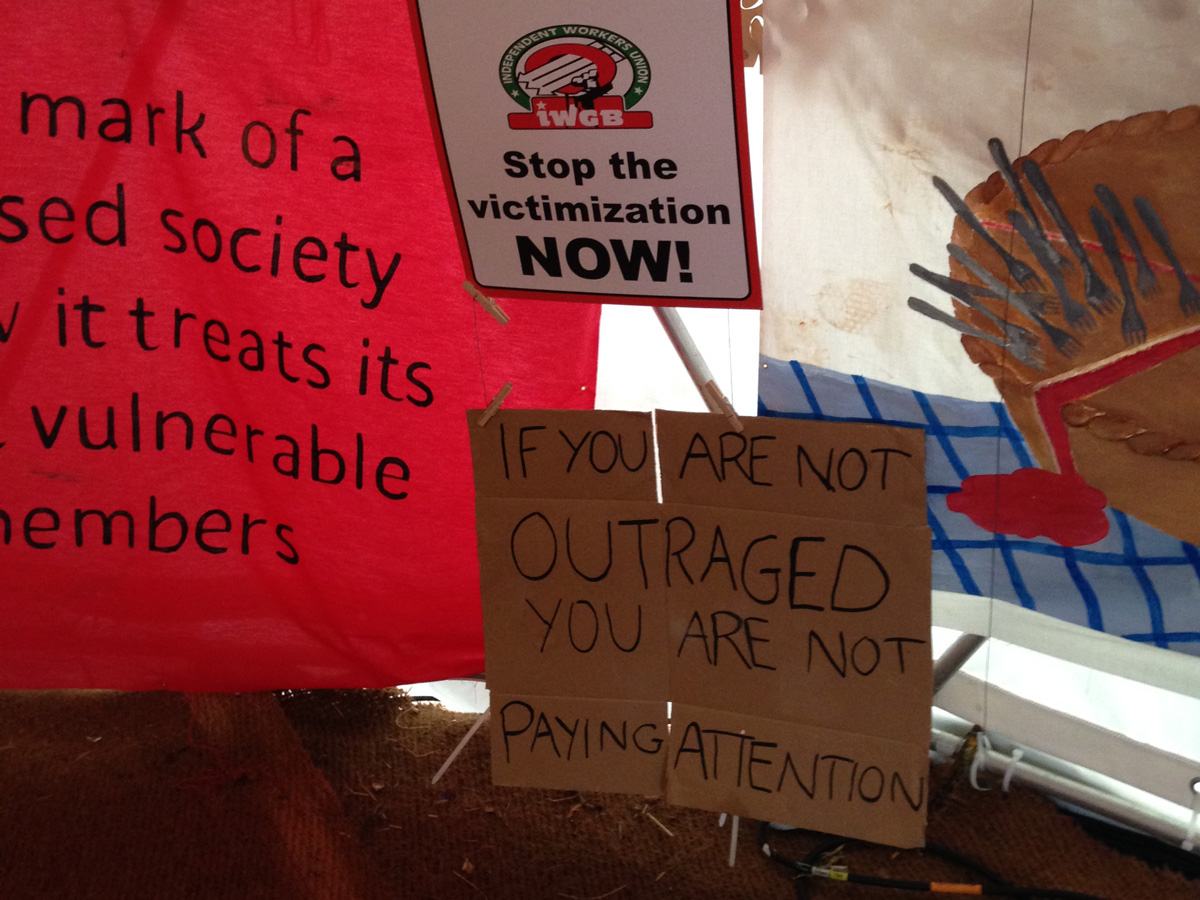 Living in Bristol I have found myself to be in bubble of extremely left-wing young people, who care a lot about the issues raised in this exhibition. A poster on one of the theme parks walls, which particularly stood out to me stated ‘if you are not outraged, you are not paying attention’. I realise many people feel its pointless paying attention to these issues as they don’t have the power to do anything. However, the popularity of Dismaland makes me very hopeful. Things need to change and the first step in doing so is to create awareness, which is exactly what Dismaland has set out to do.

And lastly I leave you with this ‘questionable can’ as I’m not 100% sure what its supposed to be or what the meaning behind it is. But for some reason I found it pretty fascinating – may be because it means that everything can be questioned.

Have you been to Dismaland? What did you think? Tell us, socially, probably: Twitter, Facebook, smoke signals.

Is Banksy Still a Local Hero or Is He Played Out?

In light of his new pieces in Bristol, Ella Buxton asks whether Banksy is still a local hero or not,...
Arts/Culture / October 27, 2014 / Ella Buxton 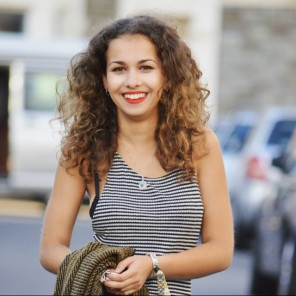 Hello, I’m Tanya, I’m a 20-year-old filmmaker currently living in Bristol. I’m about to enter my third and final year studying Filmmaking and Creative Media at the University of the West of England. I aim to peruse a career specialising in the editorial roles of writing, directing and producing. However, I also have a particular interest in editing and the post-production stage as a whole. Besides filmmaking, I also have a passion in photography and art, specifically drawing caricatures.