Apple’s recent release of ethnically-diverse emojis was met with a mixed reaction. Yero Timi-Biu investigates why we need a variety of emojis and a realistic representation of society for everyday communication.

Apple, a company that has sold more than 500 million iPhones since launching its product in 2007, has released a new set of diverse emojis available on iOS 8.3.

This means people who don’t look like the white default are rejoicing. Over the last few years, emojis have been a powerful force in adding a personal touch when communicating through text messages and social media networks. Updated iOS users now have access to hundreds of new emojis, meeting the demand from users who have wanted emojis that are a true representation of them rather than the limitation of the purely white emoji selection.

apple has Discarded the white default.

With the new update, Apple has discarded the white default, and replaced it with a neutral ‘The Simpsons’-like skin-tone. By clicking on the newly neutral emoji, users can hold it down with their thumb to view the choice of up to six different shades of skin tones.

The newly diverse emojis also feature same-sex families and an addition of flags to represent nationalities from all over the world. This is far cry from the first set of Emojis which were made in 1999 by Shigetaka Kurita whose original emojis were overwhelmingly white.

Prior to Miley’s plight, non-white people have been asking for emojis to be available that look like them for as long as the default ‘thumbs up’ was a pinky-peachy one and not a multi-choice tone one. The proposal from the Unicode Consortium states the new skin-tones are “based on the five tones of the Fitzpatrick scale, a recognised standard for dermatology. The exact shades may vary between implementations”. In other words, these are six tones that are supposed to be a representation and not a limitation of all ethnicities in the world.

Celebrating the normalising  of the Emoji world as a microcosm of our multicultural society.

Guardian writer Elle Hunt appreciates Apple’s discarding of the white default and creation of a more realistic embodiment of twenty-first century communication.  “As exciting as it is for white people to be able to choose between “pale” and “cream white” to better reflect their caucasity, the update is a real game-changer for people of colour who once strained to see themselves in either “man with turban” or “man with traditional Chinese cap” in amongst page after page of Caucasian faces”.

So who are these people criticising Apple for normalising a software so many non-white people use?

Paige Tutt of the Washington post feels that the new emojis don’t create inclusion, but segregation. They’re problematic. Instead of progression and realism, Apple has brought race in to situations where (she claims) race isn’t needed.

“WITH THIS UPDATE, THE COMPANY SKIRTS AROUND HAVING TO ATTRIBUTE CERTAIN PHYSICAL CHARACTERISTICS TO CERTAIN RACES OF PEOPLE”.

Tutt uses racist tweets with derogatory comments using brown emojis as an example of the emoji digression, but her main issue is the questionable notion of why she has to “now feel compelled to use the ‘appropriate’ brown-skinned nail painting emoji”.

When emojis were simply available in the white default, we didn’t have to bring race into things. Tutt rules this as “political correctness gone wild” and argues that she now has to identify herself racially when she tweets, and these emojis are not even real caricatures of people of colour.

There are also some iOS users that can’t handle not being the default anymore. It infuriates them.  Welcome to the club uglykeyboard, we’ve been waiting for you.

These “political correctness gone wild” issues are much more deep-rooted than uglykeyboard’s ignorance. People of colour have always had to be ‘invited’ to things, people have colour have never been the default, not to mention even an option.  Uglykeyboard  has always been the default, and the celebration of non-whites is a rare occasion in the western world, so rare that uglykeyboard doesn’t understand why they even got an invite to the party in the first place.

The normalisation of the emoji has provided a way for users to not be limited to using archetypal caricatures of themselves, or whatever ‘the nearest’ representation of their culture is (if there’s any at all). Finally we’re at a stage where people of colour don’t have to resort to using the earth’s natural satellite emoji as the main representation of them when they post their new hair cut photo on Instagram. But what does a brown-skinned emoji in a text message actually mean? 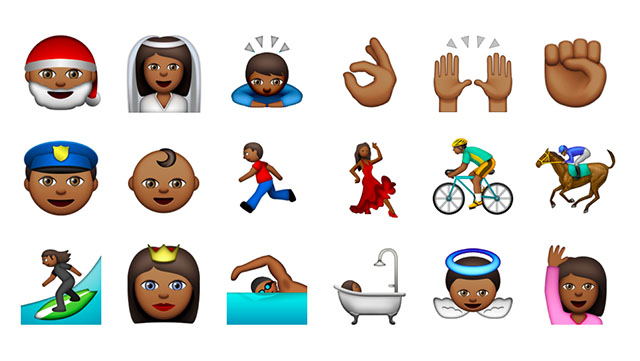 Ijeoma Oluo, states in The Guardian that she wants brown faces to be a standard element of the Internet, “It’s our turn. People will still recognise your smiley face, trust me”.Phoebe Gavin of Upworthy has a simple formula: More representation = more empathy. More empathy = less racism. This is not to say that hundreds of multicultural and ethnically diverse faces sitting in harmony on your iPhone will change the mind-sets of prejudice and hateful people, but highlighting the fact that white does not have to be the only representation in society will.

YOU KNOW TIMES ARE GETTING TOUGH WHEN IT’S SUCH AN EFFORT TO HAVE TO FIND A REPRESENTATION OF YOURSELF, A WHITE EMOJI.

When I first heard about Apple’s new ethnically diverse emojis finally being available, I was one of the iPhone users who couldn’t wait to post my brown victory hands. Finally I could actually choose which shade of brown I wanted to express myself with. I second-guessed myself at first. Was I making a political statement? Could I not just tweet my appreciation for Apple’s decision? I could. But I didn’t want to. Apple has given others who look like me the choice to laugh, cry and send quick brown-girl-cycling-frantically emojis via text instead of typing a lengthy message to say I was running late. Thanks, Apple. *Inserts either fourth or fifth skin-tone shade emoji peace-sign*.

What do you think of the newly diverse emojis? Do you use them? Avoid them? Let us know — @rifemag 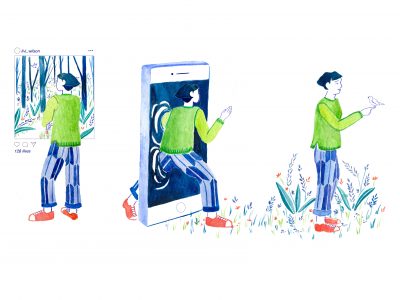 Living in the Age of Anxiety, and the Value of Reconnecting

Josie suggests how we can use our phones more mindfully in a hyper-connected world that's ruining her inner algorithms.
Social Issues / May 9, 2019 / Josie Blakelock

How long do you think your favourite film would be if all of the spoken words by white people were...
Film / September 10, 2015 / Yero Timi-Biu
<PreviousNext>