Shamil Ahmed, a young British Muslim weighs in on the situation in France and tells you why he is not with Charlie, and why he isn’t apologising about it either.

Let’s get this out there, as a Muslim, a young journalist and a human, my prayers go out to the victims of the Charlie Hebdo shooting. Whatever happened shouldn’t have happened. Full stop.

On 7th January 2015, the office of Charlie Hebdo, a satirical magazine, was at the receiving end of an attack by two gunmen (Cherif and Said Kouachi). The attack was said to be a response to illustrations produced by the magazine depicting Islam and some of its iconic figures. The attack resulted in twelve deaths. As the Kouachi brothers fled the scene, they shouted, ‘we have avenged the Prophet’ and ‘Allahu-Akbar’ (God is great).

As a result of the attack, Muslims all over the world are being asked to apologise for the attack on Charlie Hebdo. These men who claim to be acting in the name of Islam, these men who are known drugs users, dealers and drinkers (you know, those very things that aren’t allowed in Islam), are being called representatives of Islam. By the media (social and mainstream). And we, as Muslims, are expected to apologise for them. Which is stupid. Here’s why:

TWO GUYS DO NOT REPRESENT ALL OF US 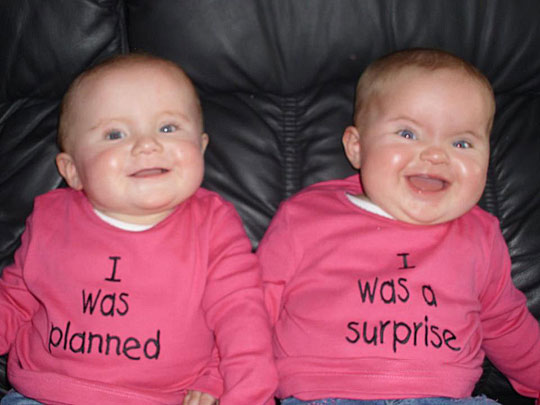 The current population of Muslims in this world is around 1.7 billion. Just to put that into perspective, nearly two out of seven people you know are Muslim.

1.7+ billion people are being asked to apologise for the actions of two people. TWO PEOPLE who weren’t acting in accordance to Islam in the first place. The only people who were responsible for the deaths on 7th January, were the two men holding the guns, no one else. Prophet Muhammad, peace be upon him, was ridiculed for his belief in Islam. When he was around, society had this horrible superiority complex, women were considered below animals, those with dark skin were slaves and those who were rich had everything, and others who were poor had nothing.

Muhammad PBUH was someone who changed these ways for the better. He was called a madman because of this. He was pelted with stones and trash. He was the target of many assassination attempts, but there was not one instance in which he retaliated or wished the same on others. He forgave and wished good on all those around him, that’s who he was.

In the eyes of an overwhelming majority of Muslims, these brothers acted outside of Islam. So why must Islam apologise for their actions?

Because I find them frigging offensive.

Let’s get this straight, Charlie Hebdo wasn’t this family friendly ‘Beano’-esque magazine, it was known for being straight up racist, homophobic and very Islamaphobic.

HL Mencken’s definition of good journalism: it should “afflict the comfortable and comfort the afflicted”

I’m not saying this just because I am a Muslim, it’s just a really mean magazine. I’m all for free speech and expression, however that shouldn’t give anyone a free pass to be completely and deliberately offensive.

There are politically correct ways to address issues, and they should be followed. Good journalism is of course controversial journalism, but methods such as Hebdo’s went a bit too far to say the least.

“I will not celebrate the privilege of “free speech” to be a disguise for hate.”- avantblargh.tumblr.com

Also, the double standards of Charlie Hebdo, really suck. They fired a cartoonist over an anti-Semitic cartoon back in 2009, but everything they’re producing now is totally fine, because of freedom of speech, innit?

This is why I don’t support Charlie Hebdo. ‘Je ne suis pas Charlie.’

You can’t pass off the messages of Charlie Hebdo as simple satire, when they incite hatred, stereotypes and deep underlying messages.

Since 11th September 2001, Muslims and Islam itself have been in the spotlight as ‘they’. Countries have been invaded, lives have been lost, and wars have happened.

Any time an incident has anything to do with a female wearing a headscarf, or a brown bearded man, it becomes front-page news. In case you didn’t know, Muslims come in all shades, shapes and sizes.

So it’s super frustrating when 1.7 billion of us get painted all in the same brush as some dude living in a desert isolated from society. 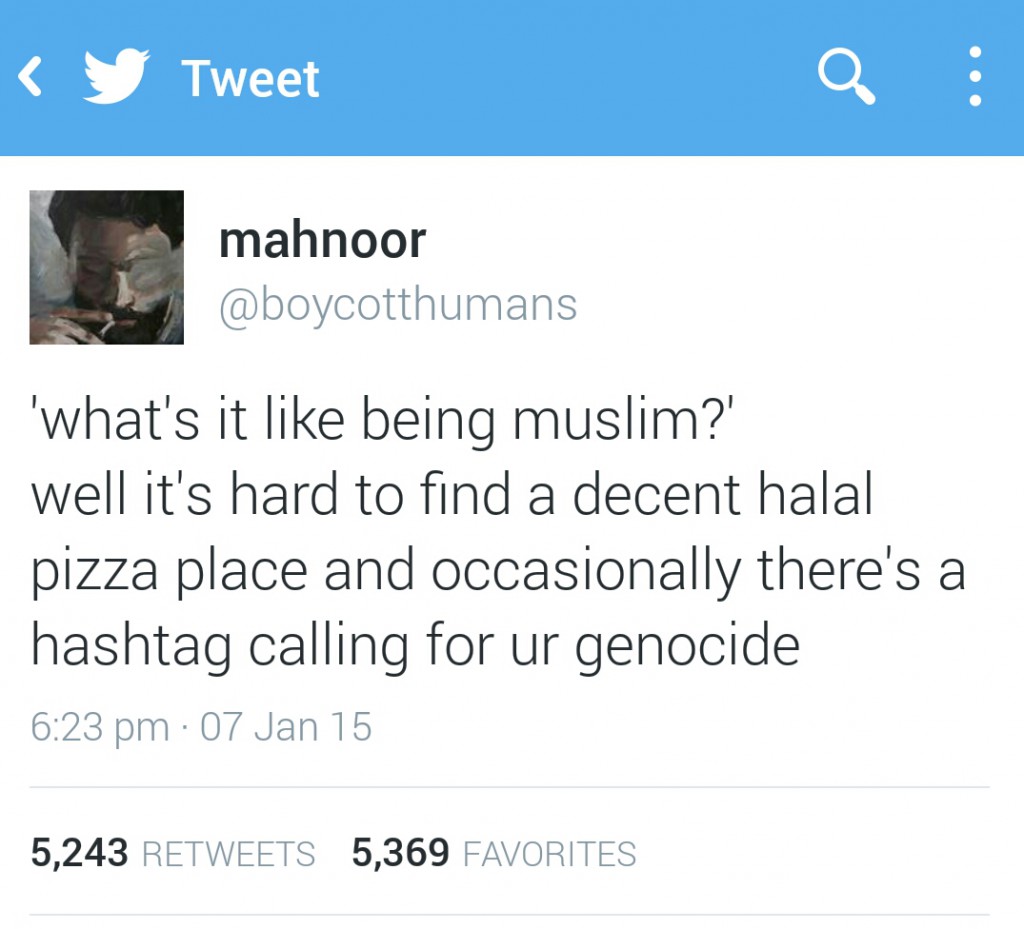 There has been so much propaganda around Muslims these days, most won’t even realise it. When the word ‘terrorist’ is mentioned, unfortunately people will picture a brown bearded dude, or a guy standing in front of a black flag with an AK-47, and then in big words: MUSLIM DOES THIS BAD THING, MUSLIM DOES THAT BAD THING (and they’re on benefits).

Do you recall the religion of Anders Breivik being plastered anywhere? Oh you know, that Norwegian guy that only killed about 77 people and tried to bomb the Prime Ministers office. No? Please say you’ve heard of him?

What about the genocide in Myanmar, Burma? Where people were essentially booted out of the country for their beliefs, if not booted, they were either killed or not fed. Around 125,000 people have left the country.

Did you hear about the 2000 people (including women and children) that were killed in Nigeria the other day by Boko Haram? This was on the same day as the Charlie Hebdo attacks. No media coverage whatsoever. Is that right?

“French police stand next to the entrance of Paris Mosque as French Muslims arrive for Friday prayers in Paris” Source: rt.com

One week after the Charlie Hebdo attack, there has already been over 50 anti-Muslim incidents in Paris alone. These incidents include assault, arson attacks on mosques as well as vandalism on property owned by Muslims. #KillAllMuslims was even trending on twitter.

What happened on 7th January 2015 was horrible. Everyone knows that. But asking the Muslim community to apologise isn’t the answer. If you are wondering why Muslims aren’t apologising for anything, you really need to Google. Muslims are always asked questions but are never given the microphone.

Until we as a society acknowledge that we are all together and need to function as a unit, things like this will keep happening. I believe that we should all have a collective responsibility to members of society that cry for help, otherwise we will keep failing them.

Do you agree with Sham? Has the Charlie Hebdo attacks effected you in any way? What about your thoughts? Tell us everything  @rifemag (on Twitter/Instagram/Tumblr) or at Rife Magazine (on Facebook), you can be completely honest.

Why ISIS Doesn’t Represent Me

What Islam Means To Me

Seven Things That Muslim Women Are Tired of Hearing 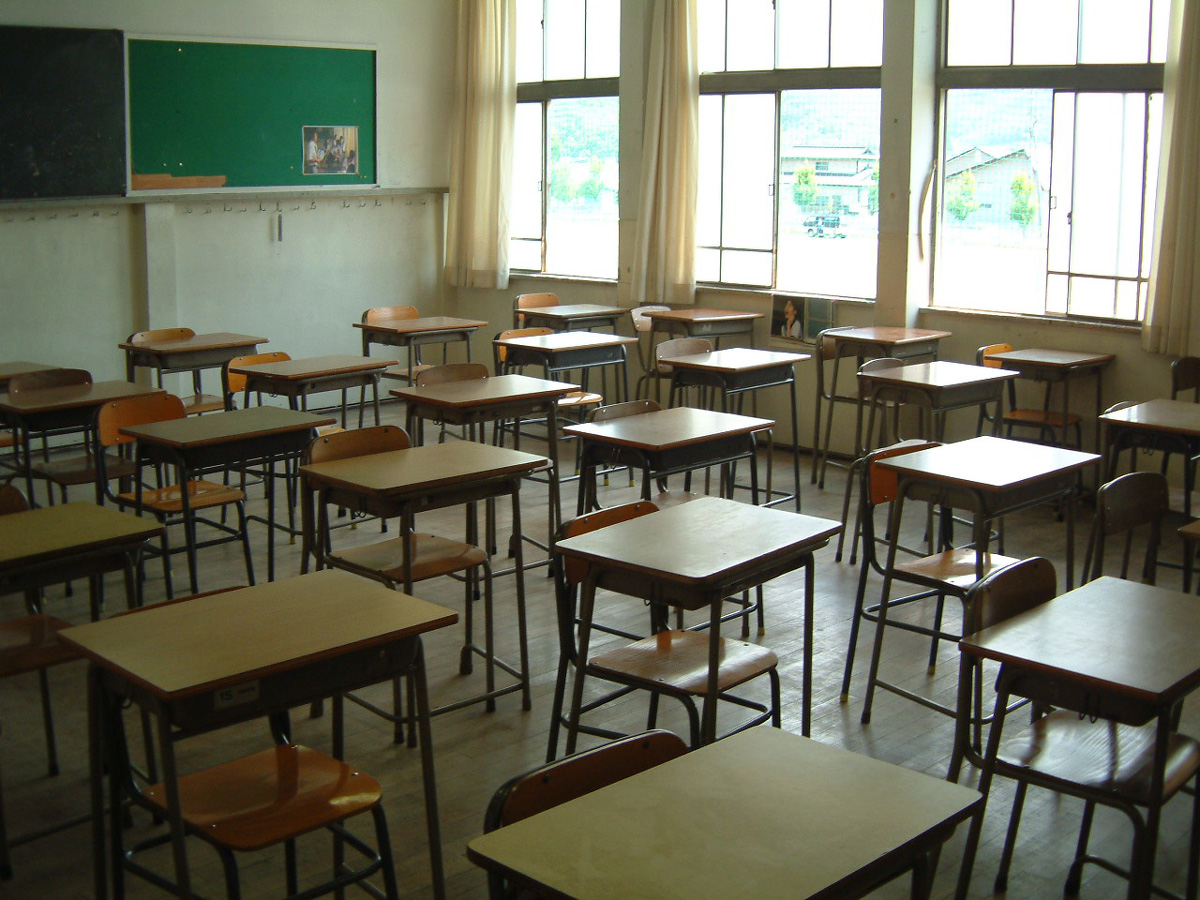 Saul questions what schools need to be doing to prepare us for the real world.
Social Issues / July 20, 2017 / Saul Bhaidani 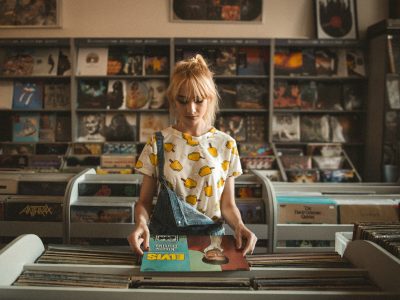 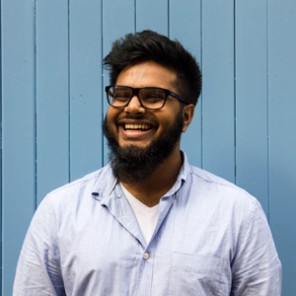 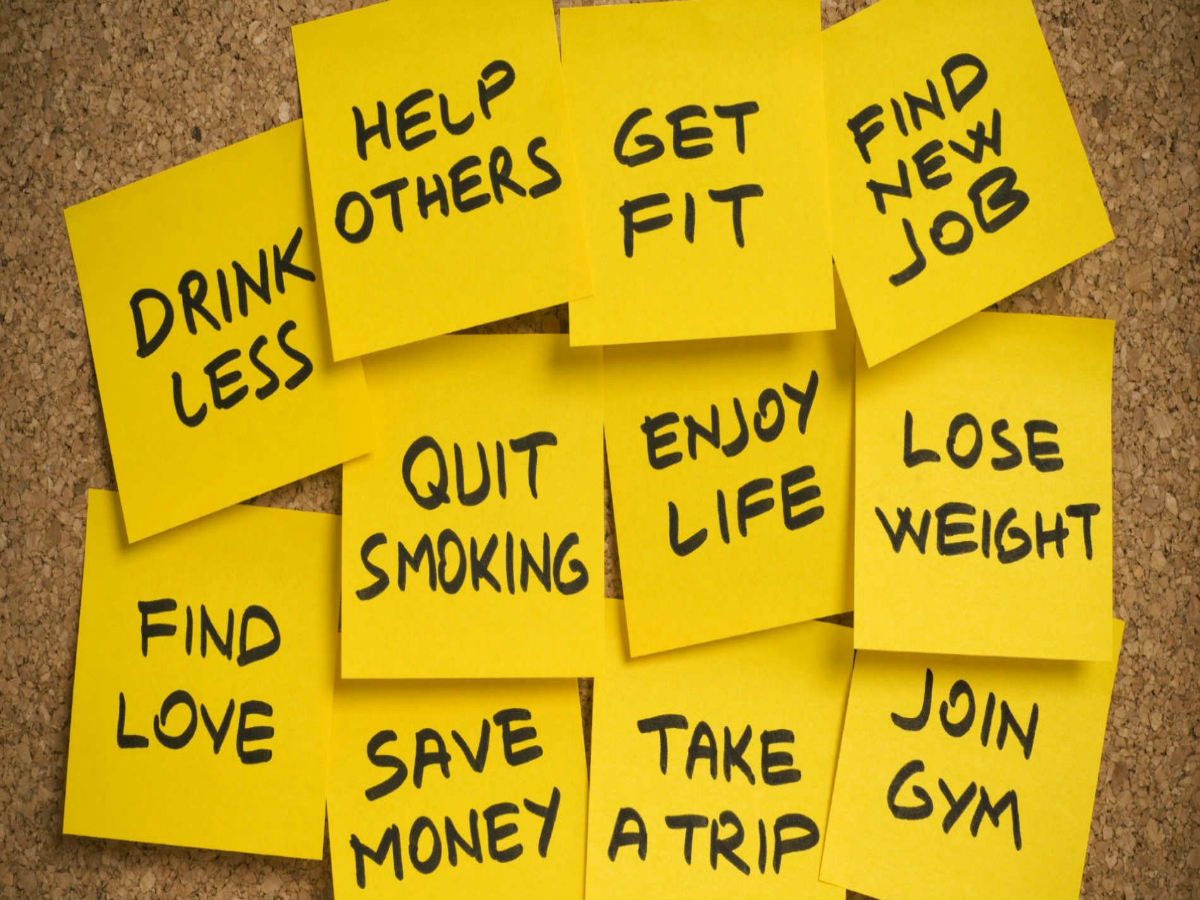 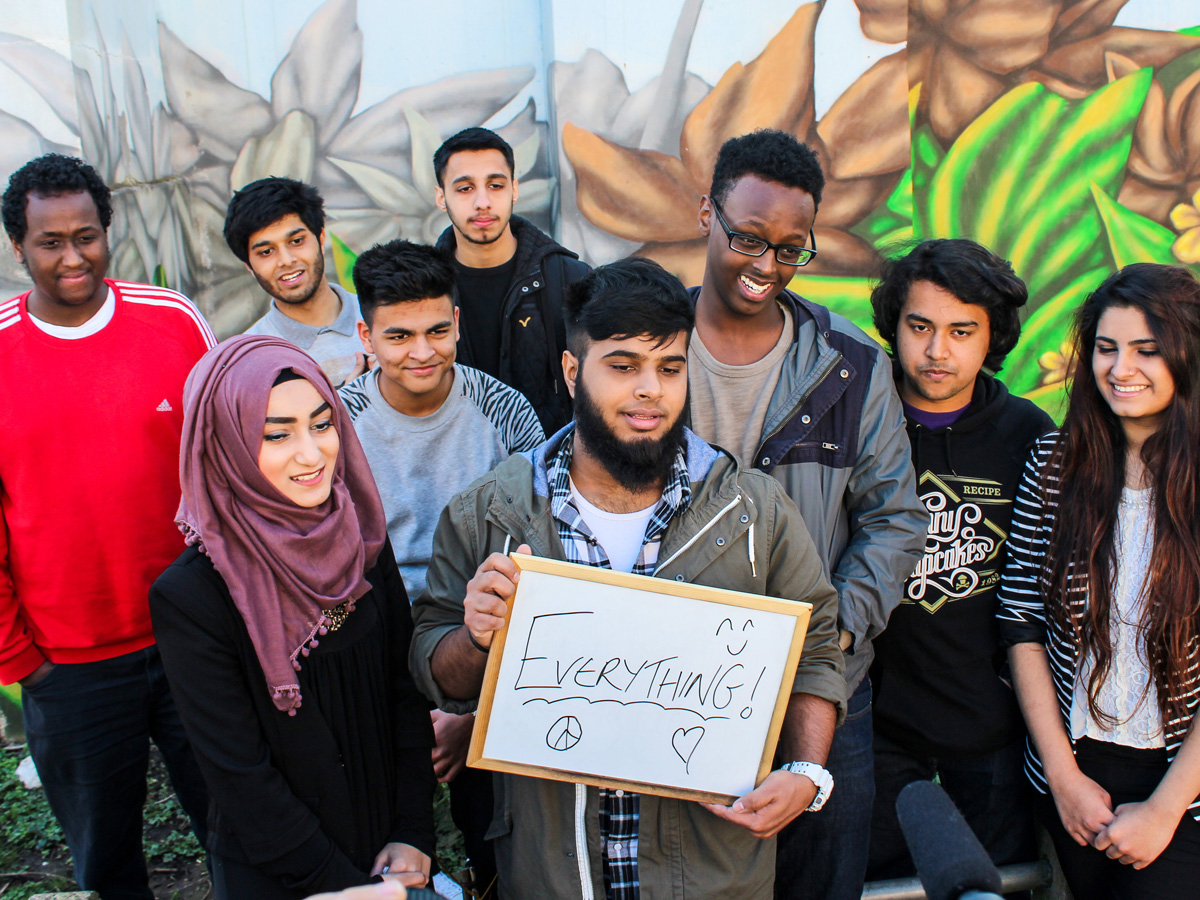 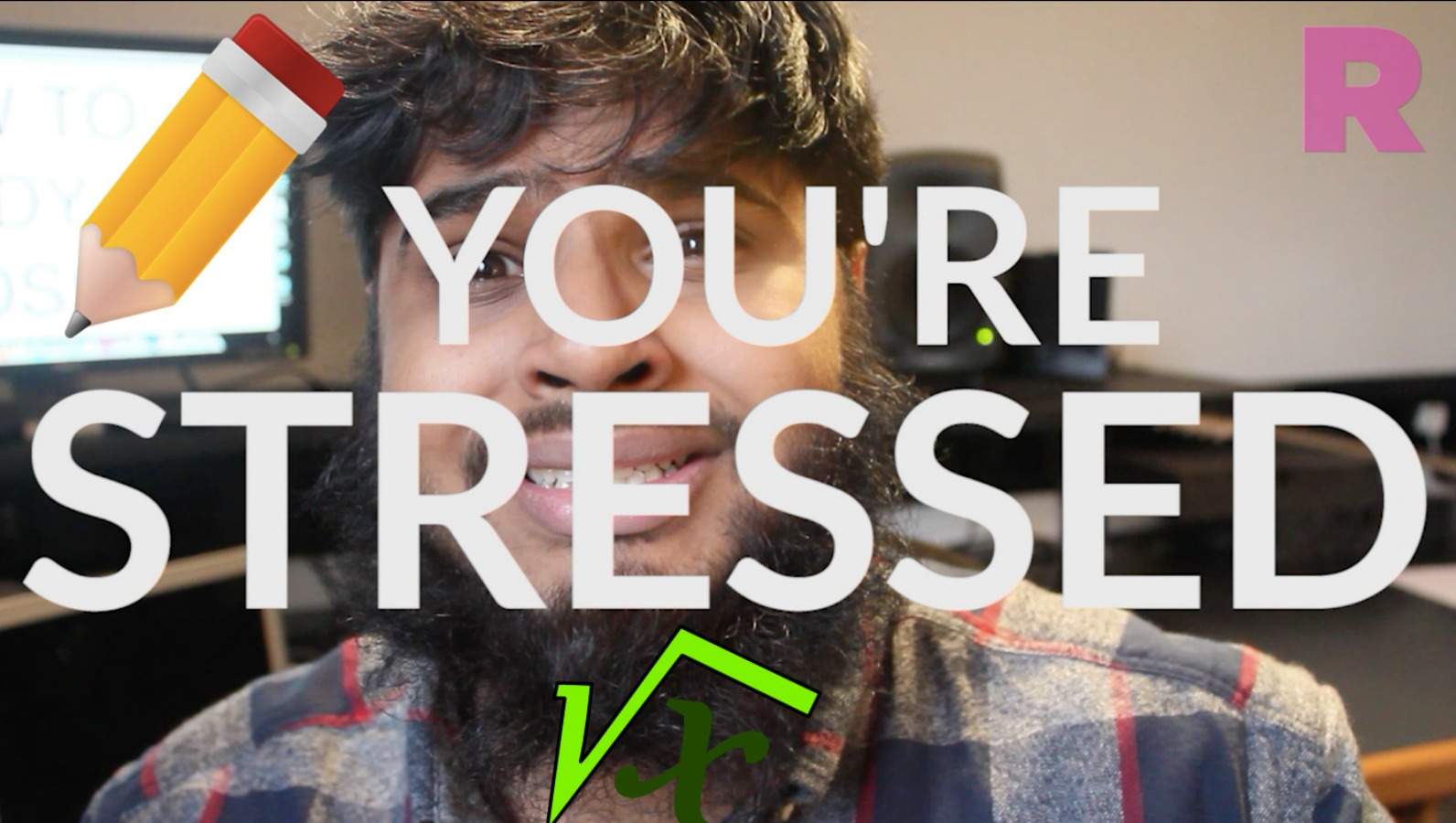 Nine Ways To Ace Your Exams (Or Coursework)